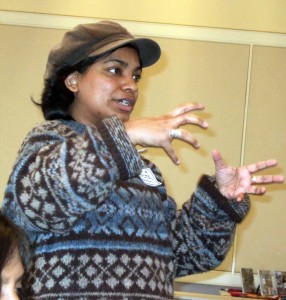 While few people realize that slavery—or human trafficking—is still going on, the good news is that anti-slavery activists are also still fighting it.

Carol Gomez ’93 started the Boston-based organization MataHari: Eye of the Day, part of the Trafficking Victims Outreach and Services (TVOS) Network, which works on immigrant rights, human rights, and “dignity for all,” she says. “Our primary focus is ending violence against women,” including the reality that some women are so desperate to get to the United States that they end up being sold into slavery.

One woman from Southeast Asia was purchased online for $9,000 and held captive in Western Mass., Carol says. Physically abused and terrorized by the man who bought her, the woman escaped and was found by local police. The Northampton, Mass., District Attorney’s office called Carol.

The woman wanted to come here to work and earn money for her family back in Asia. “Extreme poverty can drive people to desperate measures,” says Carol. When the woman escaped, the sham marriage brokers who arranged the sale sent thugs to threaten her parents and child, still in a small Asian village. Carol lined up advocates to try to help her and her family, but the effort went awry when access to the woman suddenly was cut off by the domestic-violence shelter where she was staying, whose staff bought her a plane ticket and sent her home. “We told the shelter staff that this was not your standard domestic violence case,” says Carol, but the explanations “fell on deaf ears.”

The FBI and U.S. Attorney’s offices were ready to bring charges against the brokers, and there was a real possibility of bringing the woman’s family here for asylum, but, with the woman gone and with no way to reach the family’s small village, “it all fell apart,” says Carol.

Since modern slavery was only formally recognized by the U.S. government in 2000, Carol says, there is still a lot of education to be done in systems meant to protect women. “It is hard when the current immigration policies are so broken,” she says. “There are many real hurdles to overcome,” she adds. But she will keep working to clear those hurdles away.—E.C.W.