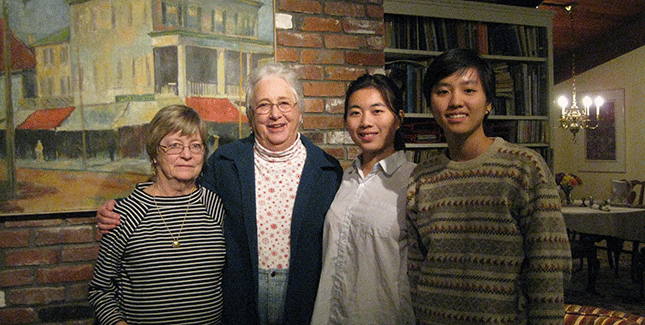 This year thirty-one students—from China, Vietnam, South Korea, India, Pakistan, Paraguay, France, and Germany—spent Thanksgiving with alumnae hosts in New York, Massachusetts, Connecticut, New Hampshire, and Maine. “Some of this year’s participating alums are repeat hosts, and some of them were international students themselves,” said Anne Luders Campbell ’80, alumna coordinator of the program.

For the second year in a row Anne Ensworth Whitney ’58 hosted Ngoc Vu and Ziyan Zhou, both class of 2017, at her home in South Dartmouth, Massachusetts, for Thanksgiving dinner with friends and family.

“There were four generations present, which gave the girls a real feel for the family nature of the celebration,” said Whitney. “We try to give them American experiences, which they do not get at home.”

During the visit, Whitney shared with Vu and Zhou some American traditions, such as picking out a Christmas tree and decorating wreaths. In return, the students—Vu from Vietnam, and Zhou from China—shared their own traditions, cooking an Asian dinner for Whitney and another alumna, her college roommate’s sister, Kathy Boyce Morse ’66, who lives nearby.