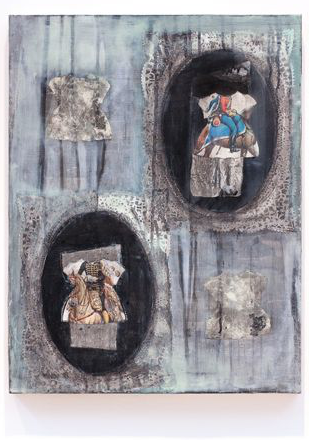 With the help of the Mary E. Woolley Fellowship, Kat Cope ’03 is creating an army of sorts. In her Brooklyn studio, Cope is constructing seventy suits of armor from nostalgic pictures and text she cut from old books that belonged to her mother and father. Each piece of armor is formed from laminated paper doll dresses and other handmade and purchased paper. By the end of next June, Cope hopes to exhibit her armor at a as an installation titled Onward March. The helmets, shields, and chest plates will be displayed on faceless mannequins and headless dress forms. Cope imagines the installation will invoke the terracotta soldiers of Emperor Qin’s tomb by emanating “an eerie spirit that one feels could march onward at any moment.”

With the addition of the Lyon’s Pride fellowship—new last year—the Association now offers eight fellowships open to all Mount Holyoke alumnae. Of these, the Mary E. Woolley Fellowship is the most prestigious and is granted to an alumna regardless of year of graduation, field of work, or place of study.

Cope will have spent over a year completing the installation. Each suit varies in construction, from plated paper doll dresses to cast paper breastplates and screen-printed cut paper chain mail. For Cope, process is just as important as vision. “As I’m working,” she says, “the pieces of armor are telling me how to finish them.”

“
In most cases we as humans do not develop a thicker skin,” Cope says, “both time and experience shape us and we learn when, and where, to protect ourselves from harm.
”

Cope compares the paper she works with to the skin that covers us, saying both paper and skin are “vulnerable to the materials and elements that assault” them, and yet also “astonishingly resilient.” Cope’s armor examines how memory molds us, both personally and as a society. “In most cases we as humans do not develop a thicker skin,” Cope says, “both time and experience shape us and we learn when, and where, to protect ourselves from harm.” She has tried to keep the armor “feminine in design” to contrast that which is commonly perceived as masculine.

These themes are not new for Cope: Much of her past work has grappled with the relationship between memory and loss alongside traditional gender roles, which restrict many women. This latest project emphasizes the pervasive nature of loss and laments the fact that, despite this universality, “women often feel disconnected from each other.” Onward March brings all of Cope’s themes together in one fragile yet mighty army that honors “the actual and metaphorical women warriors of the past, present, and future.”