Meredith Herbolsheimer Hart ’01: Getting to Know the General 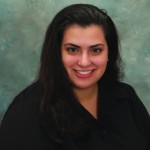 Meredith Herbolsheimer Hart ‘01 would like to thank Professor Eugene Hill for instructing her, in English 101, on where exactly a semi-colon should go. Grammatical consistency has come in handy as she writes the speeches for a US Army general.

Not any old general, mind you, but the commanding general of the US Army Forces Command, David Rodriguez, who is responsible for the training and readiness of more than 820,000 active duty and reserve soldiers. His predecessors include former US Secretary of State Colin Powell.

The general’s needs are varied and Meredith, a civilian employee who’s been in the job since last May, has written remarks for him welcoming President Obama to command headquarters, a speech he delivered at West Point Academy, notes for a Veteran’s Day event, and a welcome home to combat troops.

Writing in someone else’s voice requires getting to know the general, if you will, his favored tone, style, and personal flair. “He likes to tell jokes,” says Meredith, which is fun—and challenging. She frequently shadows Rodriquez in meetings and speeches to “watch and listen. Some words roll off the tongue easier than others,” she points out.

So how does one get a job writing for a general? After graduation, Meredith went to work on Capitol Hill, ultimately landing as a legislative assistant to Senator Ben Nighthorse Campbell, a member of the congressional Appropriations Subcommittee on Defense. After Nighthorse Campbell retired, Meredith went to the Pentagon and worked on budgetary issues for the Navy, and later for then Secretary of Defense William Gates, writing some of his testimony for Congress.

After the birth of her daughter, she and her husband decided they wanted to raise her in a smaller town—the general is based at Fort Bragg, in Fayetteville, North Carolina. So Meredith applied for the speechwriting job and was hired—from a field of more than 100 applicants. “I had a skill set that matched,” she explains. Including that semi-colon expertise.

Settled into her new life, Meredith is appreciative of both small-town life and the collaborative nature of the armed forces. “We always are working together,” she points out. “I like…the common sense of dedication. It’s very rewarding.”—M.H.B.