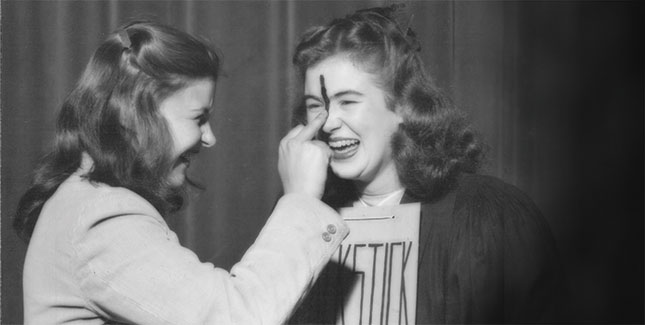 From 1909 to 1961 a select few upperclass students could be seen wandering around campus with a distinctive black stripe down their forehead and nose and a placard around their neck that read “Blackstick.” These strange signifiers marked students as members of the esteemed literary society on campus.

The Blackstick organization began trivially enough, according to one founding member, Frances Warner, class of 1911, “and . . . grew into that tyrannical thing—college tradition.” Members of the club were selected for their prowess in writing and literary pursuits, and the group met to write together and workshop each other’s pieces. Over the years, Blackstick members would compose plays for the dramatic society, have literary teas with invitations to faculty, and host dinners. One such dinner was attended by none other than T. S. Eliot, who was received in 1933 in the North Mandelle private dining room and was heralded by club members as “a provocative and stimulating conversationalist.”

The club’s unusual name comes from a fairy in William Makepeace Thackeray’s 1854 story “The Rose and the Ring.” The personification of this “active and officious” fairy, named Blackstick, was found in Margaret Sutton Briscoe Hopkins, an Amherst writer who would often visit campus and advise the students. Briscoe Hopkins was a short-story writer whose work was published in Harper’s Bazaar, and she was friends with Mark Twain. She served as both a role model and inspiration to the members of Blackstick.

In 2004 Blackstick resurfaced in the form of a literary journal. The Blackstick Review was the brainchild of Professor Corinne Demas’s Advanced Short Story Writing seminar students and was named by Archives and Special Collections assistant Allison Trzop ’04. By compiling the best works of fiction from each member of the group, The Blackstick Review keeps Mount Holyoke’s spirit of literary excellence alive.

And what of Frances Warner? After graduation, her work was published regularly in The Atlantic Monthly and Harper’s Magazine. She returned to Mount Holyoke as an English professor in 1916, no doubt inspiring a new generation of Blackstick members to wear their stripe and placard with pride.

This article appeared as “A Nod to Thackeray” in the summer 2017 issue of the Alumnae Quarterly.