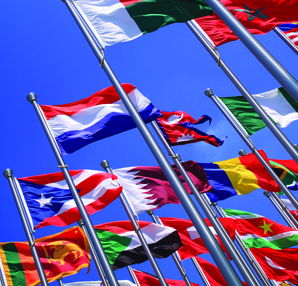 If you live abroad, love your alma mater, and want to help spread the word about it—but don’t necessarily have a ton of time to do so—the Alumnae Association has created a new volunteer position that just might have your name on it: ambassador.

The position, officially called “country (regional) ambassador,” entails serving as a first point of contact for alumnae interested in your country or region and answering questions from local residents interested in the College.

The Association is seeking alumnae living in parts of the world not already served by an international club or informal group to fill the position for a term of at least a year.

“The ambassador position was conceived as giving a real face and presence in a distant region and to do what alumnae do well—help people get what they need—either directly or by getting them to the right resource,” says Alison Tarleau Bourey ’69, the member of the Association’s Volunteer Stewardship Committee who came up with the idea.

“If there was a prospective parent who had questions about the College, the country (regional) ambassador could connect that parent with the admission office, for example,” Bourey says. “She would be a welcoming presence, not necessarily an expert on every facet of the College.”

Katie Glockner Seymour ’79, chair of the Volunteer Stewardship Committee and a member of the Association’s Board of Directors, says she’s excited about the position because it represents a new kind of volunteer opportunity.

“The Volunteer Stewardship Committee has been thinking about women’s lives, and how we all fit in volunteer work during various life stages,” Seymour says. “Increasingly, we see the need for very flexible volunteer experiences that still let alumnae make a difference for MHC and the Association.”

“If an ambassador had time to pull together others in her area for a lunch out, for example, she could do so,” Seymour says. “But if she didn’t, she could also be effective by simply contacting women in her area and letting others know she was there to assist on questions about the Association or the College.”

Seymour hopes the position will catch on—and take off. “We would love for as many people to step forward as possible,” she says. “I think we couldn’t have too many ambassadors, because this really increases the power of our [alumnae] network, and it increases Mount Holyoke’s visibility. It would be lovely to one day have somebody in every region of the world where we have relationships.”

To volunteer, contact Maya D’Costa, the Alumnae Association’s director of international and domestic clubs, at mdcosta@mtholyoke.edu or 413-538-2066.