Web Extras for Spring 2011 "A Voice of Promise" 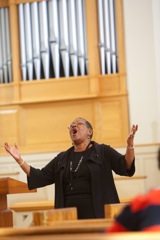 If you enjoyed the Quarterly article about gospel singer Funteller Thomas Jackson FP’94, you can:

• View a photo of Jackson in action

According to Jackson, “One of the challenges of gospel music resources is there are not many written sources; it was and is today primarily an oral tradition.  That being said, the following resources are the ones I have used for the historical context of my gospel presentations.  The Pioneer Valley (UMass-Amherst) was blessed to have Gospel Scholar Professor Horace Boyer for years, teaching and conducting gospel music. My daughter Felicia Y. Thomas ’84 studied under Dr. Boyer, and that is how I met him.”

The Golden Age of Gospel (Music in American Life) by Horace Clarence Boyer and photography by Lloyd Yearwood (Feb. 15, 2000)

How I Got Over: Clara Ward and the World-Famous Ward Singers by Willa Ward-Royster, told to Toni Rose and forward Horace Clarence Boyer (April 20, 2000)

How Sweet the Sound: The Golden Age of Gospel by Horace Clarence Boyer and photography by Lloyd Yearwood (Sept. 1995)

We’ll Understand It Better By and By: Pioneering African American Gospel Composers (The “Wade in the Water” series) by Bernice Johnson Reagon (Dec. 17, 1992)

Say Amen, Somebody: This documentary about gospel music was described by film critic Roger Ebert as “one of the most joyful movies I’ve ever seen.  It is also one of the best musicals and one of the most interesting documentaries. And it’s a terrific good time.”  See the film’s trailer here.