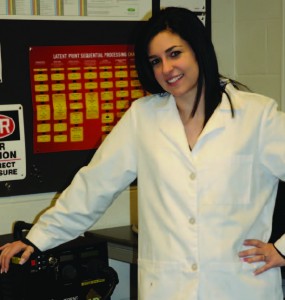 On TV shows like CSI, it’s usually the detectives who get the credit for cracking the case. But officers in the crime scene lab at the Worcester (MA) Police Department rely on MHC grad—and civilian—Jenna Doty to come up with the hard evidence.

As a latent fingerprint examiner, Jenna is a chemist with specialized training who relies on a delicate balance of high-tech science and keen observational powers to put a suspect at the scene of a crime. Even though she is not a member of law enforcement, friends and family inevitably compare her work to that of TV investigators.

Indeed, some of the cases she has worked on could serve as plot lines on popular crime dramas: collecting evidence at the scene of a sexual assault resulting in a conviction, or solving a drug case by finding evidence in a hollowed-out Pirates of the Caribbean-style treasure chest.

Although Jenna’s quick to say that her interest in forensics was piqued “pre-CSI,” Hollywood might deserve some of the credit for her career path. “I remember watching The Bone Collector (with Angelina Jolie and Denzel Washington)… I was a sophomore in high school … and [then] did a shadow job with the Springfield Police Department.”

Whether she is lifting prints from duct tape so that police can get a warrant, heading out to a crime scene with detectives, taking the stand to testify as an expert witness, or using her skills to visually examine individual fingerprint patterns, Jenna considers her job the “… ultimate responsibility. … What you say determines your credibility and someone else’s freedom. It’s nerve-wracking.”

Confidence is key in her work, but Jenna has always trusted the force of her convictions. As a high school student, she made a plan: she would go to MHC for a chemistry degree, and then to University of New Haven for an MS in forensic science. “I didn’t apply anywhere other than MHC and New Haven. I’m lucky it worked out!”—J.S.