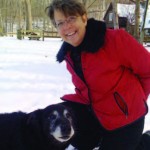 Not too long ago, a couple brought a dog into the Indiana veterinary clinic of Lisa Pantzer ’74 that they had found on the side of the road. He had been hit by a car, had broken ribs and a badly shattered bone just above the elbow joint that’s hard to heal, was old and nearly blind.

The couple didn’t have enough money to pay for her services, so Lisa agreed to treat the dog as best she could, for free, and then find him a home. (Veterinarians are softies, if you haven’t yet made their acquaintance.)

Normally, Lisa said, you’d amputate the leg on such an old dog. But his long body and short stature would not work well on just three legs so she pinned the broken bone, treated him homeopathically for pain, and took “Colin” home.

Six weeks later, she took the pins out and today, she says, he “can’t see but can spot me anyplace, can’t hear but can hear me call him, and can track my scent through woods and streams and fields.” Pantzer attributes his amazing turnaround to the holistic medical approach she and a sizeable number of veterinarians are now using.

After almost twenty years of working as a traditional vet for some of the best horse farms in Kentucky, and often accompanying horses owned by royal families in the Middle East, Lisa now focuses her one-woman practice on homeopathy, acupuncture, and Chinese medicine.

While she was interested in meditation in college and introduced to Chinese healing in veterinary school at Purdue University, it wasn’t until she started raising sheep organically that she began to experiment with the curative powers of homeopathy, or profoundly diluted medications.

Little lambs that had fallen under the feet of her horses and were badly injured bounded off following homeopathic treatments. She was sold.

Acupuncture on a dog? Sure, says Lisa. “I put needles in them and they like it. They roll over and expose different parts of their body.” She starts each visit with Qigong, an ancient Chinese technique to collect and move Qi, or energy, with her patients and their caretakers.

Lisa is now learning more about using quantum mechanics, or the fact that all things in the universe are linked, as a healing modality in her clinic and at home is practicing biodynamic farming, which uses the principles of homeopathy on the land.