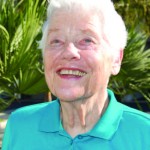 Do you know what “JAJ de DFN” means? Martha Waller does. She came across such apparent gobbledygook every day in her work for the Signal Intelligence office during World War II.

“Traffic”—intercepted messages sent to Washington for analysis—came to her office from consular, diplomatic, commercial, and private sources. Faced with lines of initially meaningless letters and numbers, Martha determined what country was involved, where the message originated, and for whom it was intended.

Clues were often provided by call letters—JAJ de DFN meant a message sent from Tokyo to Berlin, for example—and by a coded address—KOSHI designated Japanese Foreign Office communications. “I got good enough that I used to get consulted even after I got transferred out of ‘traffic,'” she recalls. Once she astounded colleagues by correctly suggesting that a particularly unrecognizable message was Manchurian.

After being transferred to a cryptanalytic office, she worked on messages’ content. By checking repeated phrases (such as “Referring to your telegram #82 of May 17 …”) against voluminous books of previously intercepted messages, Martha could make an educated guess about the meaning of a certain code group. Only then could she prepare a translation of the message.

Martha had been fascinated by breaking ciphers since she was nine, when her mother read Poe’s “The Gold Bug” to her.

After the war, she shared some of her decoding knowledge in a book for young people, Cloak and Cipher, cowritten with Dan Tyler Moore. But most of what she knows—including what was in all the messages that passed through her hands—she still considers classified. And that’s one code she isn’t about to break.—E.H.W.