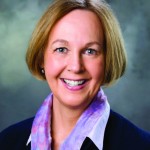 What Gail Sheehy did in The Silent Passage for menopause—brought it out into the open, normalized it—Mary Wallace Jaensch ’74 intends to do for your libido, and more.

Mary, an honors political science major at MHC and one of the first seventeen women accepted to the Yale School of Management, never dreamed that at age fifty-seven she would be chief executive officer of a company dedicated to women’s sexual satisfaction. But she is, and talking to her about both venture capital and pleasurable sex is really, really easy.

Head of Semprae Laboratories in New Jersey, she oversees the manufacture of Zestra Essential Arousal Oils, an over-the-counter, topical product made from botanical ingredients such as borage seed and evening primrose oil that is designed to heighten women’s sensitivity to touch.

She and her business partner bought the floundering company in 2008 after studies showed that 43 percent of women experience sexual dysfunction, compared to 31 percent of men; that women of all ages were affected; and that there were no products on the market that really worked for women.

“What’s interesting is that a whole lot of people assume [lack of sexual response] is a function of menopause,” says Mary. “But it strikes women aged twenty-five to seventy. We’ve actually done some quantitative work that says that about 73 percent of women in long-term relationships are interested in improvements in the experience.”

Mary has her work cut out for her. While about three-quarters of Zestra users say it has helped their sex life, only one percent of women knows the product exists. Television ads are in the works; free samples are handed out at medical conferences, and Mary continues to engage users and investors alike with her absolute comfort level in talking about sexual satisfaction.

“Now we call ourselves the vagina entrepreneurs,” she says with a laugh. “It’s a brilliant business opportunity that is also making women’s lives better.”—M.H.B.

To read more about Mary and her company, go to www.zestra.com and www.forbes.com/forbes/2009/0824/entrepreneurs-zestra-semprae-passion-play.html.