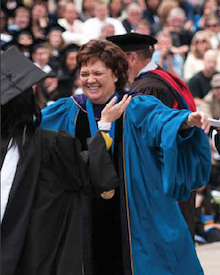 The College ’s celebration of 175 years of women of influence culminated with a spectacular all-alumnae lineup of honorary degree recipients for Mount Holyoke’s 176th commencement. Joanne Lupton ’66, Mary Mazzio ’83, Mona Sutphen ’89, and Kavita Ramdas ’85 inspired and challenged our graduates to carry out our mission of using liberal learning for purposeful engagement in the world. In her commencement address, Ramdas offered an articulate and compelling case for why “a Mount Holyoke education—a women’s college education, a liberal arts education—matters. At the heart of her argument was the conviction that “we need uncommon women” for the “uncommon problems” of today’s world—“women who are so strong they can be gentle, so educated they can be humble, so fierce they can be compassionate, so passionate they can be rational, and so disciplined they can be free.”

Throughout commencement weekend and during the following week’s Reunion II activities, I had the opportunity to meet with hundreds of such women and to hear the stories of how Mount Holyoke has shaped their lives and careers. Each of these alumnae was eager to serve as a mentor and role model for current students and recent graduates who are destined to be the next generation of women leaders. In talking to them, it occurred to me that Mount Holyoke women indeed both look forward and give back!

As we marched in the Laurel Parade and gathered at Mary Lyon’s grave and in Chapin Auditorium, we were reminded of all that binds us together across generations and of all that we can do together to make a difference in the world. Standing at the grave site, I recounted the meaning behind the tradition of singing “Bread and Roses,” begun on campus in 1978, of paying tribute to and showing solidarity with the women textile workers who championed the 1912 Lawrence mill strike. In doing so, I could not help but think of the more than 1,100 garment workers who were crushed to death in last April’s factory collapse in Dhaka, Bangladesh. There is still so much work to be done to meet the demands of economic, social, and environmental justice for women worldwide, and Mount Holyoke students and alumnae are poised to lead the way.

Mount Holyoke was founded on the idea that change was necessary—that women deserved access to academic excellence equivalent to what men were receiving in the Ivy League, and that access should not be predicated on affluence. Mount Holyoke’s groundbreaking, fierce tradition of scholarly excellence is matched by our historic commitment to being the catalyst for lasting, meaningful change. Our graduates have been at the forefront of discoveries and innovations in science, medicine, law, politics, literature, the social sciences, and the arts.

Now, in a time of unprecedented change, the rigorous liberal arts education we provide students is more critical than ever. Graduates who can respond to a rapidly changing world with adaptability and flexibility; who can write, speak, and think with precision, coherence, and clarity; who can propose, construct, and evaluate arguments while being responsive to the views of others; who can work effectively in teams; and who can demonstrate scientific and quantitative literacy, along with cultural competence in a globally interdependent world; will thrive.

Today’s Mount Holyoke graduates are prepared to meet the future head-on, knowing that the education they have received places them at an advantage. They also know that alumnae around the world will be there to support them and cheer them on!