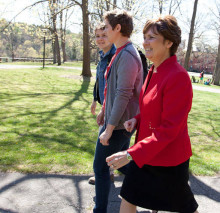 Two years ago, Maine’s governor Paul LePage removed from the Department of Labor building a mural depicting the state’s labor history and featuring 1902 Mount Holyoke alumna Frances Perkins. The governor was concerned that the mural presented a one-sided, pro-labor view of history that was contrary to the pro-business stance he advocated during his campaign. Indeed, he went so far as to cite an anonymous letter he received from a business leader who compared the mural to North Korean propaganda. Attempts to equate the history of the labor movement in Maine with a totalitarian government fueled further debate, and the governor’s critics charged him with threatening the very democratic principles he used to justify his acts. Within a month, a half a dozen law- suits had been filed in response to his decision.

I began revisiting the issues at the center of this case recently, after one of our alumnae from the class of ’63 sent me a news clipping about the labor mural from her local paper in Maine. The article reported that the eleven-panel artwork by Judy Taylor resurfaced in January and is now on display in the Maine State Museum. In reading the story, I couldn’t help but think of the power of art in shaping social movements and of the critical importance of women like Perkins in creating a better world.

Indeed, Perkins was one of the most influential voices in United States history. She was instrumental in leading the country out of the Great Depression and instituted such wide-ranging reforms as the Wagner Act, the Fair Labor Standards Act, and Social Security. Perkins stands as an extraordinary role model for women and girls seeking inspiration in a world that desperately needs more female leaders.

The removal of the Maine labor mural was perhaps emblematic of Australian feminist philosopher Dale Spender’s contention that every century has its great women thinkers, but with each passing generation the institutional politics of gender leaves women consigned to the “lower shelves” of cultural material and eventually forgotten. Because politics has kept our actual achievements out of the canon, we are challenged to “rediscover” our female antecedents with every generation.

As Mount Holyoke alumnae, we share an understanding that promoting women’s education worldwide is one of the most important safeguards against the generational forgetting that Spender notes. We also know that women’s education is crucial not only because it strengthens the institutional presence of women leaders who will work against the generational forgetting of women’s accomplishments, but also because of the urgent need to continue deepening and accelerating the pace of achievement for today’s women.

For 175 years, Mount Holyoke has educated women of influence who represent a breathtakingly broad range of political, social, and cultural perspectives. Like Frances Perkins, the College’s 32,000 alumnae are poised to inspire current and future generations. In doing so, we pay tribute to our founder Mary Lyon, to the extraordinary faculty who have taught us, and to the College’s powerful mission of using liberal learning for purposeful engagement in the world.