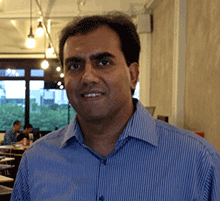 Sanjay Nath is managing partner of Blume Ventures, which he founded in 2011 along with Karthik Reddy. Blume has become one of India’s leading early stage venture capital funds, focused on seed/angel, pre-Series A, and A funding rounds for India’s best tech entrepreneurs.

Blume is one of the few venture capital funds that includes a handful of exited portfolio companies, including Zipdial (acquired by Twitter, its first in India), Taxiforsure (acquired by DST, Softbank, and Tiger Global-backed Olacabs), Promptec Renewables (acquired by Havell’s), Qubecell (acquired by Boku), Clink, and Framebench (both acquired by Freshdesk). Its emerging winners include Ola, Grey Orange Robotics, Zopper, Roadrunnr, Nowfloats, Instamojo, Mettl, Carbon Clean Solutions, and many others. Blume has been one of the most active seed stage funds in India and has a portfolio of more than fifty companies.

Prior to founding Blume, Nath had been an active angel investor. He got his start via Mumbai Angels, one of India’s leading angel groups, where he has been a member since its inception in 2006. There, he made investments across the internet/mobile, online travel, software, and healthcare sectors. Nath is an angel investor in InMobi (one of India’s best known angel-funded success stories), Little Eye Labs (acquired by Facebook), Appsdaily (formerly Onward Mobility), Tonbo Imaging (formerly Serial Innovations), and Haptik (acquired by Times Internet), among others. He brings a strong global network of investors, entrepreneurs, and professionals across the US, Southeast Asia, and India.

Earlier, Nath spent fifteen years in the US in business development, management consulting, and operations roles across organizations such as PwC Consulting, IBM Global Services, and Sun Microsystems. Early in his career, Nath supported the initial growth of Kanbay, which had a successful IPO on the Nasdaq in 2004, and was then acquired by Cap Gemini Ernst & Young for $1.25 billion in 2006.

Nath is passionate about mentoring entrepreneurs and is active in associations including TiE (where he is a charter member), Mumbai Angels, and BITS Spark Angels. He is an engineer from BITS, Pilani and holds an MBA from UCLA’s Anderson School of Graduate Management. Nath relocated from San Francisco back home to Mumbai in 2010.