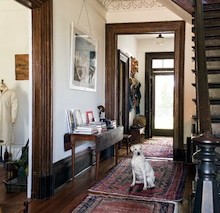 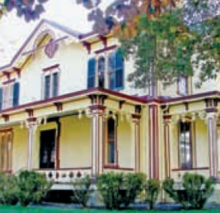 Erica Kooij Robb ’81 spent seven years renovating the Victorian-style Judge D.A. Barnes house, but doesn’t own it any more. “A house restoration isn’t like owning a house,” she explains, “it’s more like giving birth.” In 2008, Robb “gave birth” to this nineteenth-century house when she sold it to a young couple trading New York City’s fast life for refuge in rural North Carolina. Now, the young couple has made the house into a true home, one that will cradle their son and nourish their photography careers. Robb now lives in a small, modest Cape on a hillside in southeastern Connecticut but is still close to the couple. “We became family by way of the house,” she says. The house was built by Jacob Holt, a prominent nineteenth-century builder. In 1875, Judge David A. Barnes, a member of the North Carolina Superior Court, moved in. When Robb bought the house in 2001, it had been standing empty for thirty-five years. She labored mightily to keep it from being lost, “loving each architectural detail and carefully saving hundreds of letters, bits of clothing, and other artifacts.” Robb preserved its old-school charm, from marble fireplaces to ornate moldings and claw-foot tubs. Now, all 4,500 square feet are preserved and rest peacefully in Murfreesboro, North Carolina, a small town that extends quintessential Southern hospitality. 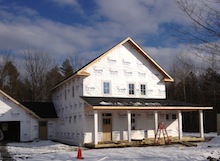 Elizabeth Kormos ’73 and her husband are building their “last” house. The goal is sustainability and accessibility and when their house is complete, they may never have to leave. “In this house, we will live, work, and play,” she says. Kormos and her husband are consultants and will work from home in their upstairs offices. For wheelchair readiness, the master bedroom is on the first floor next to a roll-in shower and bathroom. The doorways are three feet wide and the second floor is plumbed for a kitchenette so a caregiver could move in upstairs. In addition to the accessibility features, the house will meet the National Green Building Standard and will be almost as energy efficient as a “passive house,” which consumes 10 percent of the energy of typical houses. She and her husband will add a 7.35 kW photovoltaic panel to their south-facing roof. The panel they leased required no upfront cost and will save them money even if electric rates never increase. Their home’s green feats include double-wall construction filled with cellulose (for temperature retention), extensive sealing, triple-pane European windows, fiberglass siding, and heat-recovery ventilation. Many parts are made with local materials. This cozy eco-friendly home will be situated in a Ballston Spa, New York, a small village just south of Saratoga Springs. She and her husband can walk to coffee shops, restaurants, and a rail trail, which will further reduce their carbon footprint. Unlike the sleek futuristic look of most energy efficient buildings, their home will fit the welcoming character of the community. For these baby boomers, “it’s the ideal location and ideal house,” Kormos says. 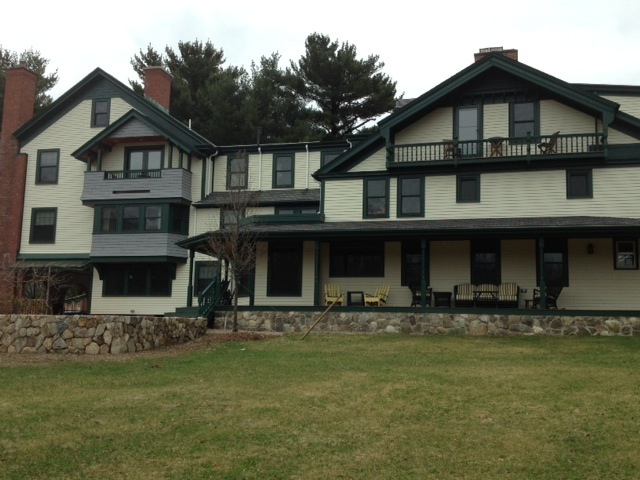 Laura Paine Beebe ’86 and her family are the sixth generation to live in the main house on the Bartol Old Farm in Milton, Massachusetts. Three years ago, their motto was in with the new and out with some of the old as they rooted through photographs in the family archives to plan their home restoration. Her aunt owned the house, known as the “Big House,” which has been in the family for 148 years. It was falling apart. Beebe’s family bought the house, replaced more than 100 windows and doors, added a new porch, and demolished part of the eighteenth-century farmhouse to add a well-insulated modern family room. They kept several relics from the old house— fireplaces, wood paneling, claw-footed bathtubs, beautiful wood floors, and old wood doors. Now she, her husband, and their two kids live in the house they saved from disrepair. When the renovation was finished, Beebe’s family had pulled off a delicate balancing act: “We dedicated a lot of time to preserving the old while also trying to make updates to make the house more sustainable in the future,” she says.

One Home Has Sheltered Settlers to Socialites

If the walls of her house could talk, they’d tell tales of eighteenth-century settlers, a twentieth-century socialite, and a traveling countess. “My modest little house has an interesting history,” Jennifer Praus Lilienthal ’90 says. Built in the late 1700s in Stockbridge, Massachusetts, the house started its life as standard settler’s home. In the 1920s, it was purchased by a socialite. She transformed it into a countryside “cottage,” adding built-in bookshelves, a bay window, an addition with a domed ceiling, and French doors leading to a marble terrace. The socialite rented the home to a countess among other elites during the popular summer season in the Berkshires. The gardens were designed by neighbor, Daniel Chester French, a prominent American sculptor at the time and the man who sculpted the statue at the Lincoln Memorial. When Lilienthal found the place five years ago, it was in a state of neglect and its history was only vaguely remembered by older neighbors. The artifacts Lilienthal dug up in the garden stirred her curiosity: pieces of pottery, a glass flask, elixir bottles, and a flintlock. She hit the archives, did a deed search in the registry, scoured old newspaper articles online, and studied old maps. Her friend, who rents the house to Lilienthal, is selling it, so she will soon have to abandon her intriguing abode. But Lilienthal has left a legacy. She has restored the house’s dignity and resurrected its history as much as possible. Every summer, she mended more of the gardens, taking care to nurture strong, lasting beauty. “I’d really like the next people to know all about it and appreciate its long history,” she says. 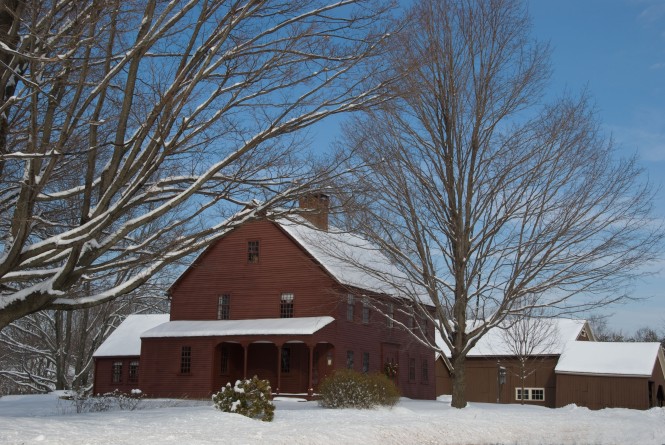 Gemma Carbonneau Baker’s ’60 house in Granby, Connecticut, was built in 1719, decades before the United States gained its independence from England. “Stepping into this home, you enter the eighteenth century,” she says. It is furnished with period antiques and has a room with stenciled walls, recreated by John Canning, who restored the ceiling of Grand Central Station in New York. The house is on the National Register of Historic Places, and has been featured in a Time-Life book and in Early American Homes magazine. 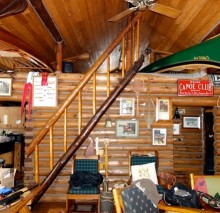 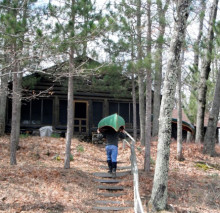 When they want to get away, Mary Reed Kelly ’75 and her husband Ken visit their log cabin on a small lake in the woods of northern Michigan. The full-log home was built in the 1930s and when they visit, Reed Kelly and her family seem to travel back in time. The architectural style has been carefully maintained, even as the structure has been reinforced. The surrounding residents have agreed to abstain from using most motor vehicles and the Kellys replace the sound of growling boats and jet skis with jazzy tunes from the ’30s. In addition to housing Ken’s antique wooden canoe collection, the peaceful cabin hosts family and friends from around the country for gatherings and getaways. The visits inspire reflection and give guests perspective. Reed Kelly says they are grateful for time there “to reflect on and discuss life’s big questions, and to become better acquainted with our guests and with ourselves.” 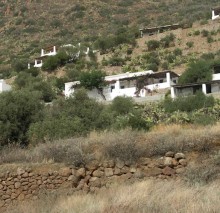 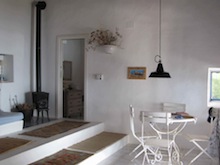 Sonja Di Tore Serblin’s  ‘front yard’ is the sparkling Tyrrhenian sea. Her whitewashed Mediterranean haven is tucked into the rocky green hills of the island of Panarea, a small piece of the Aeolian Island chain off the Italian mainland. Eight years ago Serblin (’76)  renovated the house, preserving the old wooden beams and traditional bamboo cane ceiling. Over a century ago, the house belonged to a priest. “The house was known [then] as the canonica,” she says, which translates as “rectory.” The island is so tiny that there are only two churches and there was only one priest. Serblin now has another renovation project on her hands: she is almost done renovating a small medieval weekend house in Zovencedo, a small town in the hills outside of Vicenza in northern Italy. This “jewel” of a building was probably built originally as a lookout for a nearby castle.