HIV/AIDS-Related Links Suggested by Alumnae Interviewed for our Article

The Legal Action Center is the only non-profit law and policy organization in the United States whose sole mission is to fight discrimination against people with histories of addiction, HIV/AIDS, or criminal records, and to advocate for sound public policies in these areas.

LAC provides legal advice and representation to New York State residents who have HIV-related legal problems, especially due to discrimination or breach of HIV confidentiality or testing rights. They also help with problems such as health care proxies, living wills, permanency planning, and government benefits.

There is an FAQ section pertaining specifically to people with questions regarding HIV positive status and the work place.

The Body: The Web’s largest source of HIV and AIDS information.

The Body is a very comprehensive site, with everything from articles by medical experts and advocates including Tracie Gardner. They offer an “Ask the Experts” forum where site users can submit their questions. They also host dozens of bloggers who write about their own experiences living with HIV. The bloggers are an incredibly diverse group, and nearly anyone looking to find a common experience could connect with the stories of one of the bloggers. Additionally, the site includes sections on prevention, treatment, and living.

This organization aims to address increasing HIV rates among women of color aged 13–24 through building partnerships with individuals and organizations that serve and empower adolescents. The site provides access to information, allowing young women to make informed decisions; promotes personal and professional growth; and works to create a collaborative environment for youth-serving organizations.

The mission of AIDS United is to end the AIDS epidemic in the United States. They aim to achieve this goal through national, regional, and local policy/advocacy, strategic grantmaking, and organizational capacity building. With partners throughout the country, they work to ensure that people living with and affected by HIV/AIDS have access to the prevention and care services they need and deserve.

The site has a fact sheet for each state in the country which gives the breakdown on the number of cases in each state, county demographics, gender demographics, and so on.

AIDS Alliance for Children, Youth and Families is a national nonprofit membership organization established in 1994 to give voice to the needs of women, children, youth, and families living with and affected by HIV and AIDS.

The New York State AIDS Advisory Council consists of 17 representatives from the public, educational, and medical communities, local health departments, and nonprofit organizations, including the advocacy and service community.

This site has a very clinical appearance, and features a myriad of resources and links to other resources, including youth outreach, healthcare for the uninsured, funding opportunities and statistics.

GMHC calls itself the world’s first and leading provider of HIV/AIDS prevention, care and advocacy.

This comprehensive site offers information on nearly everything, including how to get tested, how to lower one’s risk factor, and services for men, for women, and for children. GMHC also offers meals to individuals affected by HIV/AIDS, as well as access to mental health services.

Housing Works is committed to ending the twin crises of AIDS and homelessness.

Their mission is to provide people living with HIV/AIDS with access to quality housing, information on HIV prevention and healthcare. They were the first nonprofit in the country to use a self-sustaining model, meaning that the proceeds from their bookstore café, thrift stores, and catering company support the mission of the nonprofit.

Voices Of Community Activists & Leaders (VOCAL) is a statewide grassroots membership organization in New York building power among low-income people who are living with and affected by HIV/AIDS drug use and incarceration, along with the organizations that serve this population, to create healthy and just communities.

Watch a 15-minute presentation by Tracie Gardner on “The Politics of HIV Prevention: Black Women and the Fight for HIV/AIDS prevention Justice”

Synopsis: Gardner emphasizes the disproportionate number of black women with HIV relative to the whole population of women with HIV. She focuses on two age groups–young girls/teenagers and women over 45. She makes several suggestions which could relatively easily lower the occurrence of HIV:

1. Talk to women and girls about HIV. She says there is no point in pretending that young girls are not sexually active, and informing them about safer sex practices could dramatically lower their risk of infection.

2. Different branches of social services must communicate with one another. Women must have access to all manner of information, no matter what bureau or institution they go to for that information. There must be HIV/AIDS centers in places where women can get to them.

3. She says that men in the prison system are not receiving adequate care. Prisons must step up their healthcare provisions not only for the inmates, but for the population outside of the system (such as the families men return to after their prison sentences end).

Read Tracie’s article “Mandates Won’t Save Our Kids from HIV — Actual Follow-Through Will” at thebody.org. 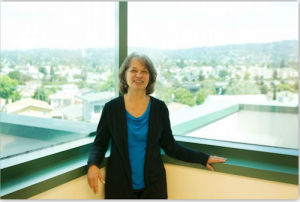 AIDS.gov has links to federal resources and funding opportunities. There is also a section outlining the uses of new media to contribute, connect, and share information relating to HIV/AIDS.

Project Inform fights HIV and Hep C epidemics by helping individuals to make informed health decisions, advocating for affordable quality healthcare, and promoting medical strategies to prevent new infections. Their events calendar informs visitors when and where they can get involved in/attend fundraisers for the cause.

Technical assistance offered through the site is available to grantees and planning councils.

Kaiser Family Foundation offers all sorts of articles and fact sheets regarding HIV/AIDS, everything from Medicare/Medicaid, uninsured coverage, and women’s health, to minority health.

San Francisco AIDS Foundation offers information on risk, testing, and treatment. Client services include housing support and benefits counseling, as well links to support for minority groups who are at higher risk for infection with HIV/AIDS, including black men and Latinos.

The site has standard info from getting tested to prevention and treatment; has a questions and answer section, fact sheets, and brochures. 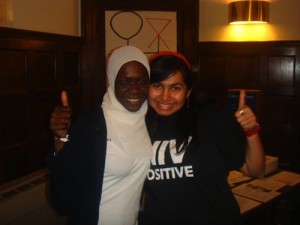 Avert.org is “the most up to date all the time, and really great for general information about HIV,” says Somji.

The site is a comprehensive and user-friendly website with history of HIV/AIDS, testing prevention, quizzes, games, and stories. Has a section devoted to sex, sexuality, and relationships, and one devoted to HIV/AIDS around the world.

The book The Wisdom of Whores: Bureaucrats, Brothels, and the Business of AIDS, by Elizabeth Pisani  is “amazing, one of my favorites. The author is funny and really comes at the whole HIV issue from an epidemiological public health standpoint. Easy for anyone to understand. She’s done a lot with HIV,” says Somji.

Pisani also gave a 2010 TED talk “Sex, Drugs, and HIV—Let’s Get Rational” that provides a look into the logic used by addicts, which is an entirely different logic than is present in the mind of non-addicts. For example, Pisani and her team interviewed users in Indonesia asking them if they knew how HIV was spread. Nearly 100% said through the sharing of needles, yet 3 out of 4 users interviewed shared needles anyway, the reason being that if they were found on the street carrying a needle, they could be taken to jail.

The book Woman at Point Zero by Nawal El Saadawi “is also great,” says Somji. “She’s an Egyptian author, its a true story.” The New York Times Book Review said of it, “Saadawi writes with directness and passion, transforming the systematic brutalization of peasants and of women into powerful allegory.”

“The Truth About HIV”

This 2009 TED talk by Hans Rosling is described as having “new facts and stunning data visuals.”

This article in The Body, is a three-part article that provides a firsthand glimpse of how a small-scale organization called HIPS (Helping Individual Prostitutes Survive) goes into the red light district of DC after hours and distributes what sex workers need to stay safe and stop the spread of HIV.  Somji volunteers with this organization.

And the Band Played On

And the Band Played On (1987 book by Randy Shilts—and 1993 HBO film —about the early days of the AIDS epidemic). “It includes everything—health policy, the people who were tracking it, politics, economics, public health, quick decisions, its amazing. Highly recommended,” says Somji of the film.

Read more about Aleefia Somji’s “HIV Positive” work while a student at MHC and in London. 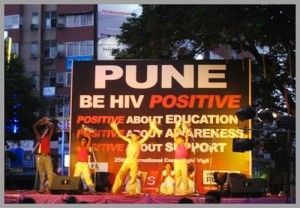 Wake Up Pune: “This is the website for the HIV Positive campaign and the first HIV organization I volunteered with, where I learned what disruptive theatre is, and where I met some of the most inspiring people ever,” says Somji.

Good magazine’s changing face of AIDS infographic brilliantly illustrates the successes and failures of the world’s fight against HIV/AIDS over the past three decades.

Alumnae Arden O’Connell ’97 and partner Liz Berges ’94 started Coalition for Courage after spending a year working and living in Zimbabwe at an center for HIV/AIDS orphans. The nonprofit now runs a scholarship program, and provides psychosocial support and food aid for the agency. They raise about $100,000 annually for the orphan-care center. Berges reported that one young woman they sponsored for six years has just finished her first year at MHC.  She notes that there are two alumnae on the board and several others who work with the nonprofit on various projects.

Chelsea McCracken ’09 wrote the following about the work of her classmate, Brooke Nichols:

“Even as a young alum, Brooke has made an impact on HIV research and helped inform policy and funding decisions on both a small and large scale.

From her Mount Holyoke days through her master’s in epidemiology at UMass-Amherst, she spent a total of 6 months in Luderitz, Namibia, doing original research on the spread of HIV. She focused on alcohol consumption and migrant work patterns to better understand the epidemic. Her research concluded that having many informal drinking establishments in an area was linked to higher HIV prevalence, and after hearing her conclusions, the town put into place a program to register and formalize all of these drinking establishments. (She published a paper on her research in AIDS & Behavior: Nichols et al., “Density of Drinking Establishments and HIV Prevalence in a Migrant Town in Namibia,” 2011, in which she acknowledged Mount Holyoke for its financial support.)

She is currently working on her Ph.D. at the Erasmus Medical Center in the Netherlands, where she looks at the math modeling of the HIV epidemic in rural Africa. The first part of her Ph.D. has focused on seeing if “treatment as prevention” or “pre-exposure prophlyaxis” would be cost effective interventions. Because of this model, she was invited to the HIV Modeling Consortium, headed by Imperial College and funded by the Gates Foundation. She published a second paper, in the Journal of Internal Medicine, titled “HIV testing and antiretroviral treatment strategies for prevention of HIV infection: impact on antiretroviral drug resistance.” In October 2011, she also met with policy makers and mathematical modelers from around the world in South Africa to compare models and come to consensus on the similarities and differences among the models. This gave policy makers and major funders the opportunity to give their input on the models, discussing what would help them make funding decisions for different prevention measures.

She is now working on a mathematical model to investigate the potential emergence of drug resistance in Africa if treatment is scaled up. She is doing this in partnership with the World Health Organization, to help inform their policy decisions about antiretroviral therapy.”