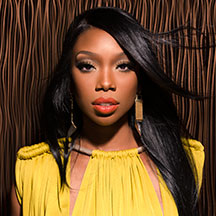 Open to the Mount Holyoke and Five-College communities

A recording artist and entertainer with more than forty million records sold worldwide, Brandy is also an actress, having appeared in television shows that include Moesha, Brandy: Special Delivery, Brandy & Ray J: A Family Business, and America’s Got Talent, and films such as Cinderella, I Still Know What You Did Last Summer, and Afrodisiac. Her most recent accomplishments include a starring role in the popular BET series, The Game, and debuting on Broadway this summer as Roxy in the popular hit musical Chicago.

This event is free and open to the Mount Holyoke and Five-College communities. Tickets will be disseminated at the entrance of Chapin Auditorium until capacity is reached. Doors will open at 8:00 p.m.