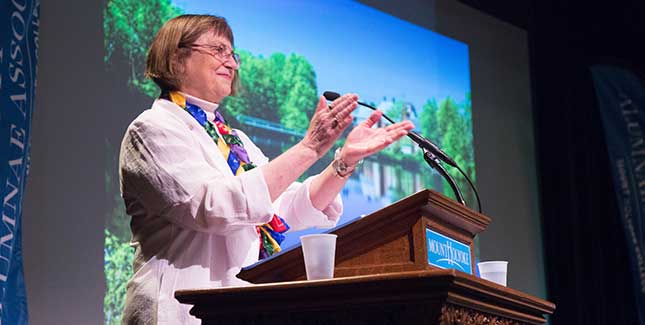 » View past and present award recipients

Awarded for eminent service in promoting the effectiveness of the Alumnae Association and/or College. Significant leadership, specific accomplishments, and stellar service have been consistent over an extended period of time and broad-based across multiple major areas of involvement, which include classes, clubs, global regions, groups, the Alumnae Association, and the College. Awarded beginning at the 20th reunion. Deadline for submission: July 31 prior to reunion year

Awarded to honor an alum who has demonstrated exceptional loyalty to the Alumnae Association and/or College with her consistent effort and active involvement over an extended period of time in at least one area of service. Volunteer effort can be on behalf of classes, clubs, global regions, groups, the Alumnae Association, or the College.  Awarded beginning at the 20th reunion. Deadline for submission: July 31 prior to reunion year

Awarded to a recent alum who has demonstrated strong leadership, consistent effort over time, and active involvement in one or more areas of service, resulting in a meaningful accomplishment for the Association and/or College. Volunteer effort may be on behalf of classes, clubs, global regions, groups, the Alumnae Association, and/or the College. Awardees will have graduated 15 or fewer years ago at their next reunion. Deadline for submission: July 31 annually

Named in honor of Mary Graham Davis ’65, its first recipient, this award “will be presented to alums who have gone above and beyond routine volunteerism in order to advance the mutual interests of both Mount Holyoke College and the Alumnae Association.” The Davis Leadership Award recognizes inspired and visionary leadership that has helped strengthen both organizations, resulting in sustained, positive impact for alums, students, faculty and staff. Awarded beginning at the 50th reunion. Deadline for submission: July 31 prior to reunion year

Awarded to an alum (or a group of alums) who has demonstrated innovative leadership in a single area of service or for a singular accomplishment that has stimulated significant positive impact. This award recognizes an alum who has identified an opportunity or need and has addressed it through a new initiative, program or collaboration. The work may be a one-time effort for a club, class, group, global region, the Alumnae Association, or the College. Awarded at any time starting two years after graduation and thereafter on a reunion cycle. Deadline for submission: July 31 prior to reunion year

Presented to an alum for outstanding achievements and service to the larger society through salaried or volunteer fields of endeavor. Recognizes work that exemplifies the ideals of a liberal arts education; that demonstrates professional distinction, sustained commitment, and/or creativity; and that reflects the vision and pioneering spirit of Mary Lyon.

Given to an alum for outstanding achievement in and contributions to the field of education, honoring the service that former president Elizabeth Topham Kennan ’60 has given to the College and to higher education in general.

Awarded at the College’s Spring Celebration of Excellence to a recent alum (graduated 15 or fewer years ago) who demonstrates exceptional promise or sustained achievement in their life, profession or community, and whose work embodies the humane values which Mary Lyon exemplified in her life and inspired in others.

The Athletic Hall of Fame was established to honor athletes, coaches, administrators, and those who have made outstanding contributions that have had a significant impact on the Mount Holyoke College athletic program. The Hall of Fame will induct new members on a biannual basis in odd numbered years. Recommend an alum

The College confers Honorary Degrees upon an alum who has exceptional and distinctive achievements. The Alumnae Association recommends alum candidates for an Honorary Degree to the College’s Committee on Honorary Degrees which makes the ultimate selection. Honorary Degrees recognize extraordinary contributions in the arts and sciences or service to society, through accomplishments that demonstrate both intellect and character to a high degree. Recommend an alum