1890s Basketball Uniform Took Fashion from Trends of the Day 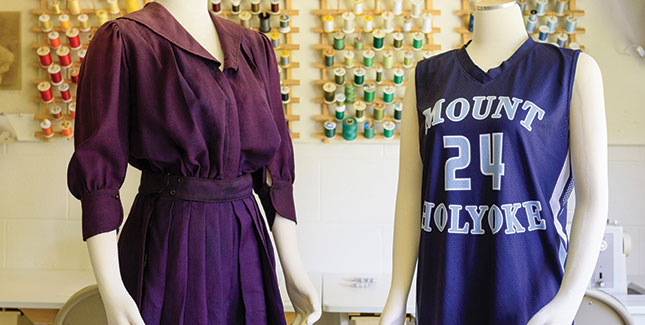 Tucked in the back of a closet in the Kendall Sports and Dance Complex, Bardee Sadlier recently discovered a bunch of vintage athletic wear. Knowing little other than the collection was valuable and interesting, the associate athletic director passed her finds over to Elaine Bergeron, costume shop manager in the theatre department, who unearthed a fascinating early basketball uniform.

The piece, circa 1895, was made of wool, the only choice for athletic garb back then. Despite its weight, the fabric dried well, kept its shape, and didn’t cling to the body—a quality that would have been unseemly for women at the time. Replete with long sleeves, a cinched waist, and full pleated bloomers, the outfit would have also included a neck scarf around the collar, stockings, and boots. Originally dyed Mount Holyoke blue, over time exposure to light has turned this uniform purple.

Though the antique attire looks uncomfortable for wear while playing a sport that involves running and shooting baskets, the design took from fashion trends of the day, and many alumnae reported loving their athletic wear, as noted in a letter found among the collection from Jennie Jerome, class of 1911. Students also played a different version of the game back then; instead of five-on-five, they played six-on-six with two offensive players stationed at one end of the court, two defensive ones on the other, and two called “rovers,” who moved up and down the court during play. It is unclear whether numbers were used to identify players or even whether any competitive games were played at that time.

Basketball players at the College now wear 100 percent polyester uniforms. Durable, stain-resistant, and machine-washable, the fabric has become the norm for athletic wear of most kinds. Sleeveless V-neck shirts over long shorts with elastic waistbands provide ease of movement; pinholes in the material allow for good airflow.

Home games are played in solid white uniforms accented with both light and dark blue; away games call for dark blue with accents of light blue and white. Both versions of the uniform are imprinted with paw prints for the Lyons team mascot as well as the College name and each player’s number.

Current Head Basketball Coach Michelle Scecina notes that the change in attire over the years has been adapted to suit the changes in play. Women are playing faster, higher-caliber basketball these days due to the sport’s increased popularity and more opportunities for players to specialize at a young age.

Scecina is anticipating new uniforms, arriving this fall. The uniforms will include a sleek racer-back top with a scoop neck and a gradient-like fade design on the shorts. Grey will replace white as the home color, while at away games, the traditional blue will continue to represent Mount Holyoke.

This article appeared as “Basketball Uniforms” in the summer 2017 issue of the Alumnae Quarterly.

Mount Holyoke’s first basketball teams played in Blanchard Hall, site of the College’s original gymnasium. At the turn of the twentieth century, students played on teams of six, with each class—freshman, sophomores, juniors, and seniors—fielding its own team. By 1910, competition expanded to include intercollegiate teams.

The rules of the game and the location of the contests aren’t the only things that have changed. Here’s a look at how basketball uniforms have changed over the years.