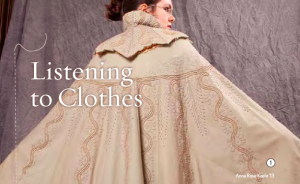 Above Chapin Auditorium, high up in Mary E. Woolley Hall, we climb the stairs to reach the Mount Holyoke Clothing Archive. I feel a ghost hunter’s anticipation as my guide unlocks the first door and I step into a storage room under the eaves. My overwhelming impression, in this crowded space, is of the ebullience of women’s garments ranging back over more than 170 years, a colorful history in cloth.Theatre Costume Shop Assistant Anna Rose Keefe ’13, my guide, tells me that few items have a known provenance. Most must speak for themselves. The clothes, donated by alumnae and others, are sorted by decade. As I follow the narrative of fashion through the small rooms, I see that, among other things, it’s a branch of art history. A cream wool cape with glass beading (left) and corded trim belongs to 1890s Art Nouveau. 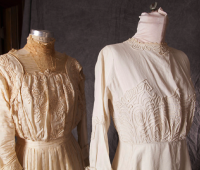 There's More in Our Closet

Feast your eyes on a photo of fashions from the Mount Holyoke clothing archive’s “closet.”
Web exclusive

All the clothes, though, are too fragile to be worn on stage. Theatre Arts Costume Shop Manager Elaine Bergeron has explained that the department, custodian of the archive, uses the collection for study and to copy for costumes. In addition to work on shows, Keefe’s tasks include assisting with sorting, cleaning, mending, and, where resources allow, conserving pieces, and entering their details in a new cataloguing system. The department has had some items digitally photographed, Bergeron says, and is working toward making, with the future help of Library, Information, and Technology Services, a searchable online resource for research in textile design, construction, and fashion history.

After the doors are closed and the locks double-checked, I am reluctant to leave. My mind is full of what I’ve seen and the whispers of garments I didn’t get to look at. How can I leave them up here? They have so much more to say. 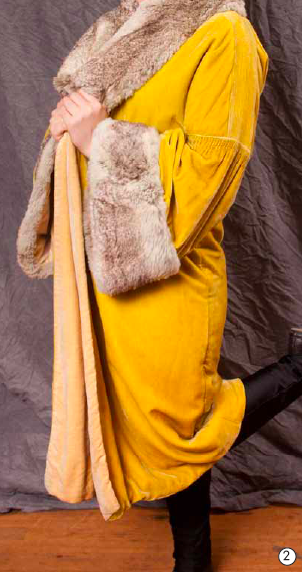 The psychology of clothing intrigues me, the ways it expresses identity and evokes emotion. A strapless evening gown with tulle insets might demand a 1950s figure and posture, while a yellow silk velvet 1920s evening coat offers a welcoming embrace, inviting the wearer to clutch its chinchilla collar and let the hem swing. 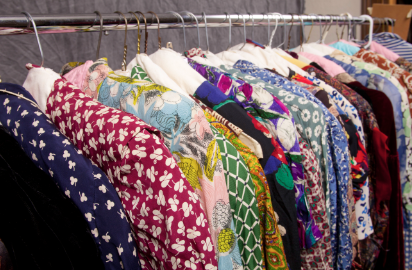 Along one rack, print dresses from the 1940s play a bright jazz riff. Full of energy and optimism, these frocks of silk, rayon, or cotton seem made to move. Rayon, I remember, became the can-do substitute when World War II made silk rare. Keefe and I discuss how fashion, once derided as frippery, has become an area of research in economics, history, art, and anthropology. 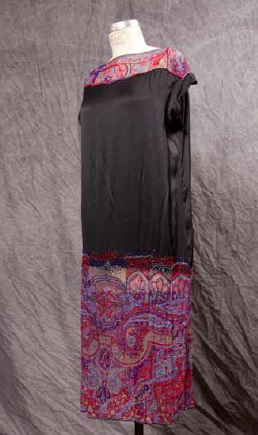 Women marching in such long skirts won suffrage, but a shimmying beaded shift and a brilliant hand-crocheted jacket from the 1920s flaunt the changes in women’s roles that followed. These bright things seem to scoff at their predecessors’ restraint. I notice, though, that detailed handiwork unites the styles. One woman with a taste for embellishment could have worn both as she strode ahead through time. Looking closely, I feel too the presence of those who did the fine construction of the clothes and their adornment, exchanging woman-hours and eyesight for a living. 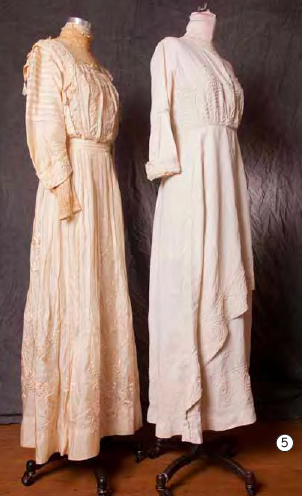 I admire the grace of pale, high-collared dresses, the white worn by Jessie F. Maclay Jones (MHC 1910), the ivory from 1916. 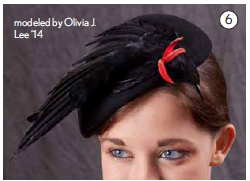 A bird constructed of real feathers on a 1950s hat (above) is both saucy and strange, a surrealist fantasy. 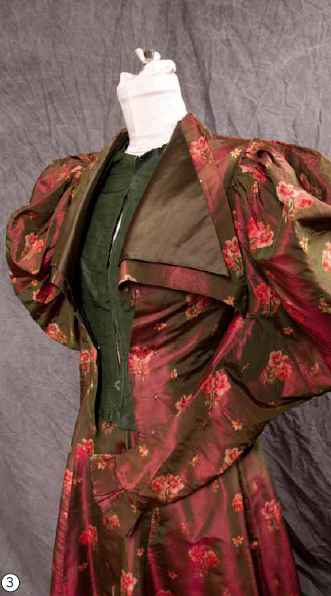 A grande dame of a silk taffeta dressdemands attention. As it happens, it speaks French: a label inside the waist belt reads “A. Felix Breveté / Faubourg St. Honoré /Paris.” Breveté means patented, but this design’s silhouette became the rage in the 1890s. Puffed shoulders and ballooning upper sleeves made waists look smaller by contrast, an illusion that returned in the 1980s, as relics in my own closet attest.