Throughout the summer we’ve been posting then-and-now photos of Mount Holyoke buildings. See how the campus has changed over the years. 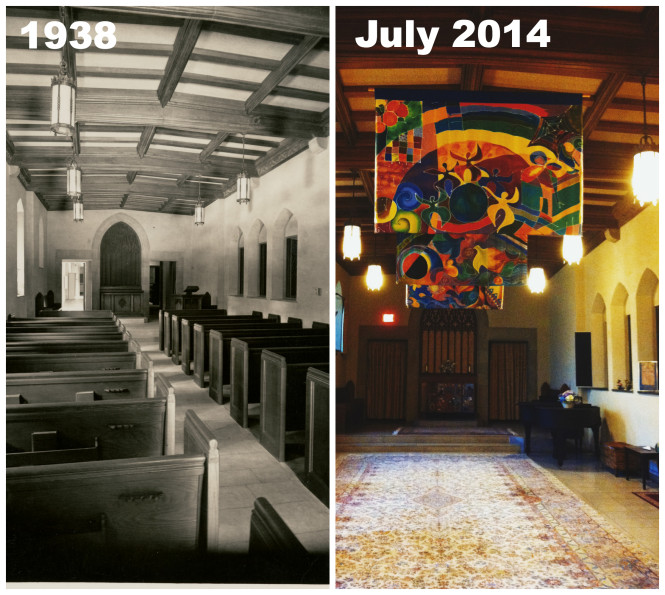 Abbey Interfaith Sanctuary, open to students of all faith backgrounds for reflection, journal writing, meditation, and walking the sacred labyrinth, was formerly a small Christian prayer chapel. In the late 1990s, the space was converted by students, staff, and faculty and now holds sacred objects and texts from the different faith groups represented on campus.

The Harriet Newhall Center was built in 1902. It was run as the Book Shop Inn from 1926 to 1954, at which time the College took over its operation. In 1979, the building was restored and enlarged to house the admission and financial aid offices. A front portico was added in 2005, but many of the building’s original features remain intact.

The Pump House, built in 1852, supplied water to the Seminary Building and later housed zoology specimens. Today it is the oldest building still standing on campus, and, while it looks much the same, the surrounding landscape has changed over the years, including with the construction of Willitts-Hallowell in the 1970s.

Pearsons Annex was built before 1810 and was known as the “Brick Store.” Throughout its history it has housed freshman, sophomores, and most recently Frances Perkins students.

Kendall Sports & Dance Complex was built in 1950 and replaced Blanchard Hall as the gymnasium. The facility has since quadrupled in size, with significant expansions in 1984 and 2009.

In 1917, Williston Hall burned down. Today, Clapp Hall stands in its place.

See Blanchard now compared to more than twenty years ago.

See Safford Hall now compared to more than one hundred years ago.