As an expert on mentoring, psychology and education professor Becky Wai-Ling Packard understands the importance of reaching out to alumnae in her teaching. “Alums can be the most relevant and compelling role models for students, because students can imagine themselves taking those next steps,” she says. “Alums share some similar values—they chose the same institution, had a similar core experience, and understand students in a way that another professional might not. People think you have to be super famous or super accomplished, but it can be reassuring to students to see many different models and alums from different career stages. Students tune in to alums in a very powerful way.” For her Leadership and Public Service course this spring, Packard asked alumnae with relevant careers to submit profiles that her students read as part of their first assignment. About eight alumnae participated. One profile in particular resonated with a number of students in the racially diverse class. It was by Jennifer M. Gomez ’05, a first-generation college student who overcame significant obstacles—growing up in a low-income neighborhood in New York City; learning English as a second language— to attend Mount Holyoke and, later, Berkeley Law. She’s now a member of New York Governor Andrew Cuomo’s prestigious Empire State Fellows Program. 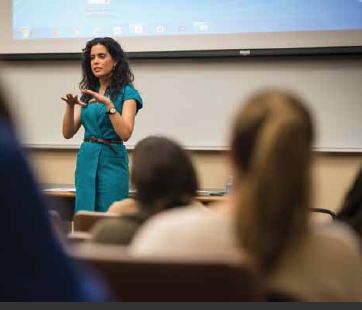 Packard invited Gomez to campus. She had dinner with students who had admired her profile, then met with the whole class to give what Packard calls an “inspirational and informative talk.” The experience gave Gomez a taste of what it’s like to be a mentor. “It was interesting because I’m constantly seeking mentors,” she says. “To be on the other side, and to think that I had something to offer, was rewarding and validating.” Gomez is part of a growing number of alumnae who are making meaningful connections with current students through several pilot projects that reflect the College’s commitment—spelled out in its strategic plan—to linking a liberal-arts curriculum and a career. So far, these projects have been small in scale and have targeted specific alumnae whose careers relate directly to coursework. But the College and the Alumnae Association share the goal of tapping many more alumnae who are motivated to give back in this way. After all, who better than alumnae to guide undergraduates down the path from the classroom to the work world?

Alums Go Back to Class 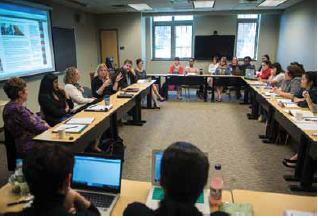 Intensive as it was, the alumnae relished being part of the course. “This has been a more meaningful experience as an alumna than any I have had in many years,” says Middleton, president of Emerge America. “It was a great way to bring my experience into the classroom and to encourage our students to consider political careers.” Rao, executive director of the Massachusetts Women’s Political Caucus, appreciated the opportunity to donate her time and energy to Mount Holyoke. “I feel that it is very important to give back to my alma mater in a way that keeps a face-to-face relationship,” she says. Markovits and her students were moved by the alumnae enthusiasm. “The alums were eager and excited to give feedback and answer questions. They were so invested in us,” Vanessa V. Keverenge ’14 says. “Having alums involved in this class strengthened my attachment to Mount Holyoke. Through my interaction with alums, I have more tangible evidence of how the MHC spirit and sisterhood live on once one leaves this place.” So Jin Lee ’13 says, “Having alums come back and share their insights and expertise related to our course material has been extremely helpful. It is great to know that we have many alums who care about the institution and current students enough to dedicate themselves to making our classroom experience successful.”

The 2012–13 academic year also marked the kickoff of the VP-50 initiative, a videoconferencing project that aims to bring outside speakers to fifty classrooms in a variety of departments. Economics professor Eva Paus used videoconferencing to involve two alumnae in a senior-level seminar, Economic Development in the Age of Globalization, this spring. Using Adobe Connect, she brought in Evguenia A. Sokolova ’01 from Moscow and Kate Gordon Murphy ’08 from Virginia. “Both were former students with whom I had kept in touch, so I knew their career paths,” Paus explained. “I wanted the seminar students to have a better idea of future careers in economic development. It was great for them to hear how the alumnae had gotten from MHC to where they are now and to have the opportunity to ask specific questions.” Paus acknowledges that virtual visits are less personal— not to mention prone to technical glitches—but says videoconferencing technology enables alumnae-student interactions that might not otherwise take place. History professor Holly Hanson agrees. Including alumnae in her courses “has gotten a lot easier with Skype,” she says. “Last semester I had Mary C. Hansen ’10 in Malawi and Amy Koler ’02 in Baghdad talking to the curriculum-tocareer class—at the same time. It was MHC in the twentyfirst century.” Hanson counts herself lucky to teach in a field—African development—in which many alumnae work. “So when we’re thinking about the challenges of African governments, I can turn to alums in the diplomatic corps who are interacting with African leaders; when we’re studying HIV/AIDS , I can think of alums who are working in public health, and their on-the-ground experience makes what we’re studying in class much more real,” she says. “And that’s really exciting.”

How Alumnae Can Get Involved 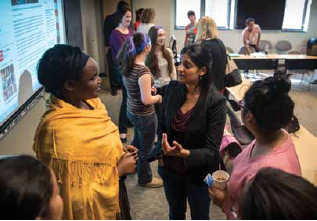