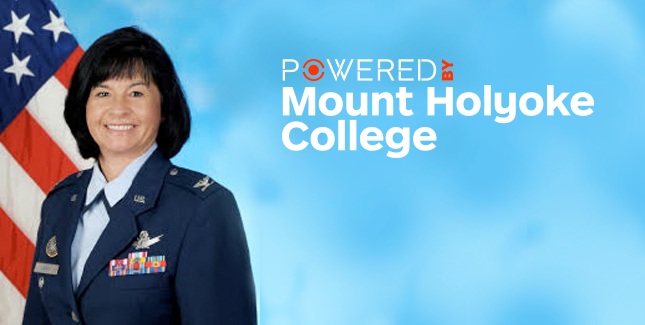 “I love learning about cutting-edge technology that can protect our war fighters,” says Colonel Lina Rivero Cashin ’88, a senior project engineer for The Aerospace Corporation. A STEM major at Mount Holyoke College, Cashin credits her dual-degree in math and physics for helping her enter the space operations career field.

Cashin, a twenty-eight year expert on space operations and policy, provides technical analysis on the operation and future acquisition of Global Positioning System (GPS) and communication satellites at Aerospace, which supports United States Strategic Command, the joint headquarters for the nation’s nuclear command and control, and space operations missions in Omaha, Nebraska.

Before joining Aerospace, Cashin served in the Air Force for twenty-four years as an award-winning leader in space and cyber operations, policy, and strategy. During those years, Cashin directed the nation’s space situational data sharing program, ensuring safety of spaceflight and pioneering international transparency for improved spaceflight operations, which led to seven international agreements.

My major at Mount Holyoke opened those doors.Lina Rivero Cashin ’88

Cashin counts herself lucky to be in the position she’s in now. “I enjoy working with young men and women who are passionate about this country and coming up with innovative solutions to future problems,” she says.

And she feels strongly that she was qualified for her current position because of her technical degree, but that’s not all she gained from her college experience. One of her favorite things about attending Mount Holyoke was learning from those around her. “My first year roommate was a ballet dancer. She was fabulous and came from a different world. She brought me to performances and showed me how hard we all work to fulfill our own dreams, no matter what your aspiration.”

As for what she has learned about life and career since graduation, a quote from Virgil comes to mind: “Fortune favors the bold.”

“Every time I have dared to do something—put my physical, social, or emotional courage on the line—the result is amazing,” says Cashin. “Not always instantaneous results, but I have never been disappointed by trying. You learn, grow, and develop as a person by having courage to make that bold move.”