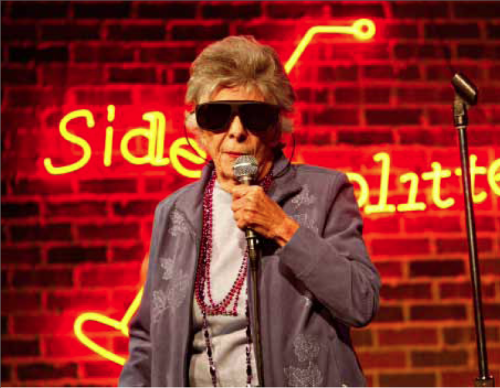 Dottie Segal Casper ’48 didn’t think of herself as funny for most of her life. But in her late seventies, she suddenly started knocking ’em dead as a stand-up comedian.

On little more than a whim, she showed up for a 2004 comedy workshop at Side Splitters in Tampa, Florida. “They gave me this look like, ‘What on earth are you doing here?’” she recalls. All the others were young and experienced performers. Casper was neither.

But when the workshop leader said to her, “You obviously don’t want stage time today,” she shocked everyone by taking the stage immediately. “I went up, and all these things just came to me,” she says. “For instance, they’d left the mike way too high for me, so I climbed on a chair to reach it, and they were hysterical. And from there on in, I had them in the palm of my hand!” Organizer Maurice Jovan told her to get a routine together and she’d be in front of an audience the following week. Casper had only one question: “What’s a routine?” She was that clueless.

The next weekend, though, she had a routine and “killed” her first comedy audience.

“I told [the audience], ‘They taught me to hold the microphone next to my chin so when I turn my head, the mike will go with me … I wish I could turn my head, it would make driving so much easier … especially backing up!”

The audience roared, and Casper was hooked. At age eighty, she bested 140 contestants to win the title of “funniest person in Tampa.” Jovan says of Casper, “She’s a fearless performer. Those strike a chord with audiences because they put their whole self out there.”

Mark Craycraft, an entertainment consultant who helped Casper reach broader audiences, says, “She’s a great ‘left turn’ from a guy in a suit or a young loudmouth offending someone’s wife. She’s funny, relatable, and worth the price of admission.”

On the surface, nothing in Casper’s earlier life made comedy a likely career choice. She had a “perfect partnership” with husband Mark Casper— she divorce lawyer. She was also a Donna Reed–style homemaker and mother of five. “We had a traditional marriage where the woman is in the background, and I had all these things to say that never got said.”

Dig into Casper’s history, and you’ll find plenty of clues to an adventurous spirit. As a child, she climbed trees, and shot and developed her own photos. Later, she and Mark lived on a houseboat during “his hippie stage.” And she has been a “protector of the underdog” all her life. While at MHC, she earned a pilot’s license and started a campus flying club. As her children grew, Casper became a swimming teacher, earned a B.S. in counseling, and cofounded a business with her daughter providing continuing education for mental-health professionals.

Still, Casper always took a back seat to Mark. “The world revolved around what he was saying and thinking, and I learned to live with that comfortably,” she says.” But when my husband died, I came into my own. And I discovered that I was funny. If Mark could see me now, he’d roll over in his ashes and fall off the mantel.”

And she is funny, a peek at the videos on her Web site (notMYgranny.com) confirms. And although Casper adjusts her act to each audience and abhors the “heavy sex stuff ” other comics use, many of Casper’s jokes are risqué.

“I go on stage wearing an eye patch and say, ‘Please excuse my nicotine patch; I’m trying to quit smoking … I’m also trying to give up sex, and boy you should see that patch!’”

“Some of the things I say are funnier coming out of my mouth than from someone younger,” she admits. “They don’t expect innuendo from a little old lady.” That’s why, when she pulls stage props such as K-Y jelly from her oversized purse, she’s got the audience in stitches.

Casper writes and rewrites—as many as twenty times—routines that evolve from real-life incidents. She often runs jokes in progress past her lifelong friend and comedy sounding board, Ethel “Junior” Edwards Goldstein ’47. “I like to write and imagine, so I can take some funny thing that happened and make it funnier. I wouldn’t do some of the things I talk about, but I can give myself permission to talk about them on stage. It’s almost a fantasy life, where you can free the bad girl part of you without having to be a bad girl.”

“When I was younger, the funny things I said were never received as humor, so I learned not to say them. Luckily, I unlearned it. I was always such a good girl that my goal now is to live long enough to make up for it.”

Casper on a local Mardi Gras–style parade: “I walk with a cane and use it to catch the beads the ‘pirates’ throw. Fortunately, at my age, I don’t have to lift my shirt very high to flash.”

Most of Casper’s offspring are fans of her act, which she says helped loosen up her relationship with her grown children. Her grandchildren—the ones old enough to hear her act, at least—love having an outrageously funny granny.

And Casper is having a blast. “I love to make people laugh,” she says. “If I do that, my health and everything else improves. And I enjoy being the center of attention. On stage, when I’m talking, nobody’s interrupting me! It’s not easy to get that, especially for women. And not having had it, to have it now is so much fun.”

Medical issues have recently curtailed Casper’s performances, but until she can return to the stage more often, you can find her riding her adult tricycle, taking photos, pondering writing a column for the local newspaper, acting in an independent film, and playing competitive ping-pong. (She qualified for last year’s Senior Olympics national finals.)

“I’m the kind of person who needs new things all the time, which is probably why I had so many babies,” she quips. You can almost hear a comedy club drummer going ba-da-bum in the background to underscore the punch line.

Material from an interview by Jill Parsons Stern ’84 contributed to this article. This article appeared in the summer 2010 issue of the Alumnae Quarterly.