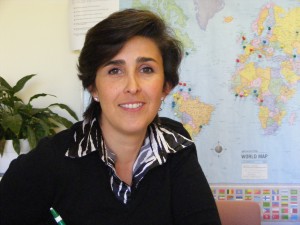 Eleanore Velez FP’07 was exposed early in life to people from all over the world when business associates of her grandfather would visit their home in Mexico City, speaking different languages and sharing their food and cultures.

Sent to a YMCA camp in the Berkshires as a girl, she spent thirteen summers as a camper, then a counselor, and ultimately as the international staff coordinator. She became the voice of the kitchen and maintenance workers from foreign countries.

Eleanor spent three years working for the YMCA in New York City, in part running a program that took disadvantaged Americans kids to Mexico. The Y exposed her to a different America, one that was economically and socially stratified, she says. “I realized that not all kids that are American play tennis.”

In New York she also became acutely aware of her status as a minority Latina, something she had never thought about before. In a city of such great diversity, there remains enormous division, she realized.

Returning to the Berkshires with her husband to raise her children, Velez first worked for the Latin American Council where she assisted El Salvadorans, Colombians, and Puerto Ricans relocating to the area. (The Latino population in Berkshire County rose 26 percent between 2000 and 2004.) “It taught me about other people’s struggles,” she explains.

Her own education and work at Berkshire Community College now allows her to offer support and information to recent immigrants interested in getting their children into college, an opportunity the parents never had.

“I do believe that education is the great equalizer. MHC inspired me,” says Eleanore. Velez now has her sights set on establishing a women’s college in Mexico.—M.H.B.