Family Vs. Work: Do You Really Have to Choose? 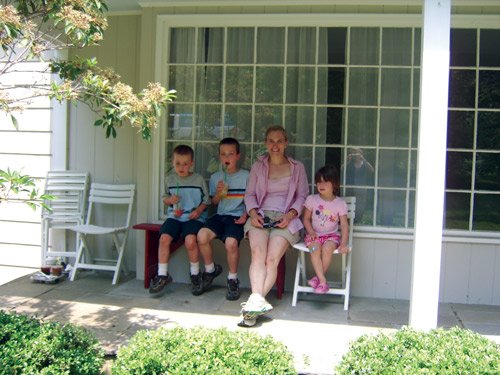 The Quarterly arrives. I open to the class notes, and sigh. Another mother of three gets a promotion at her multinational corporation. Or publishes a book. Or lands a tenure-track professorship.

Should I write in? Nah. I do Suzuki piano with my three kids. I’ve organized the Great Books discussion circles at my sons’ elementary school. I’ve joined my church choir and sometimes sing solos. But success? Travel? Prestige? That’s what other alums want to read about, I imagine. So I lurk on the fringes of alumnaehood.

I’m a stay-at-home mom. But although I never heard motherhood discussed when I was on campus, in every aspect of my life I’m drawing on some part of my college experience. And I’m not the only one. 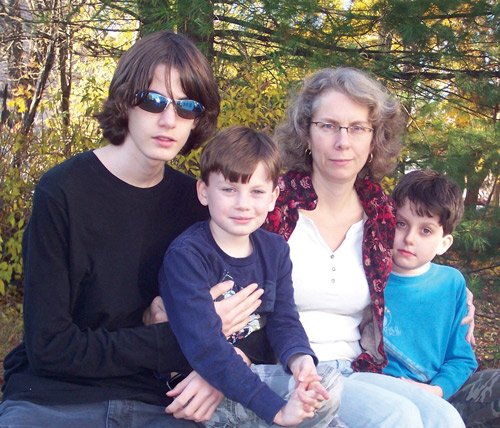 Kathryn Gandek-Tighe ’84 (right)  has been home since her oldest son was born fourteen years ago. She also has nine-year-old twin boys. She left MIT as an associate director of development primarily because “the childcare options available were not wonderful, and I felt I could do better.”

“While an at-home mom, I’ve worked part-time as a writer. I’ve done unpaid work as a theater director, PTO president, and library trustee,” she reflects. “My life path is similar to that of my mother [Jean Davis Gandek ’52]. Both of us feel the education we received at MHC not only enhanced our work as caregivers and volunteers, but also resulted in leadership positions in our volunteer work.” 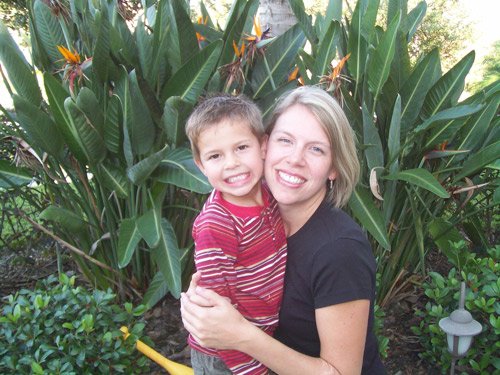 Caroline Carlson Jorgensen ’97 says her son Thomas, 5 (left), “had a traumatic birth experience. While he is fine now, my priorities about career and family were put immediately into perspective,” Jorgensen says. She and her husband truly struggle financially on one income, she adds, “but we both feel very protective of our children and couldn’t imagine anyone else raising them.”

I couldn’t either, which surprised me. Before Charles was born in 1999, I couldn’t imagine giving up full-time work. There were early childhood experts, I reasoned, who knew far more about caring for babies and, frankly, I wasn’t at all sure I was up to the task. I also imagined a combination of crushing boredom and tedious tasks that was not at all appealing.

The birth experience and challenges of round-the-clock breastfeeding swept those thoughts away. The many wakeful nights and figuring out what actually to do with an infant were more intense than any paid work. When Charles was six months old, I turned down the student-teaching assignment that would have taken me from the master’s in education I earned while pregnant with him to a teaching job. But who else could possibly do what I was doing? Two years after Charles, Ethan was born. Two years later, Anna.

A Fuzzy Line
I drove a minivan and frequented Target. In my suburban town, I was one of many stay-at-home moms. But over the years, it became clear that the lines between work and home weren’t so distinct. One friend began assembling gift baskets in her garage, and now does a brisk business selling them online. A former public relations writer makes jewelry. A homeschooling mom works evenings at the supermarket. A native of Italy teaches the language to kids after school.

Statistics from a Pew Research Center survey of moms with kids under eighteen (414 respondents in 2007; 457 in 1997) echoed what I saw. Among working moms, 60 percent last year said part-time work is the ideal situation, compared with 48 percent in 1997. Among at-home moms, 48 percent said staying home is ideal, up from 39 percent in 1997.

When Anna was three, I had some nostalgia about my former self, and reached into that bag we all carry, to something at the bottom that was almost forgotten: I’d been a writer and editor in my twenties. Three e-mails later, I had a freelance job editing a newsletter for a former employer. I was still a stay-at-home mom, but I could dust off some skills and contribute to the family coffers.

And if making money isn’t their motivation—a study in MSN Money estimates an astonishing million-dollar price tag for the opportunity cost of giving up salary and benefits to raise kids—some moms use this time to add more interesting things to their “bag.” 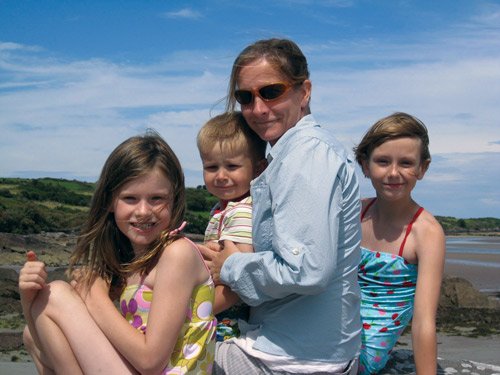 Kristen Donovan Wixted ’90 (above)  studied Russian at MHC. She stopped full-time work as a speech-language pathologist to stay home with Rebecca, 9, Bridget, 8, and Peter, 3, but also so that she could pursue something new. “I always had this crazy dream of writing children’s books,” she said. “I wanted to be a good role model for my girls. Sounds corny, but I thought it would be good for them to see me throw myself in the ring with no guarantee of success because it was what I loved doing.” While she hasn’t published a book yet, she’s created a language activity—“sort of a card game,” she says—for children with language disorders, published by Super Duper.

Similarly, Susan Abert Noonan ’82 (right) says she has “the best of two worlds. I sold my PR firm and now work almost full-time out of my home. I still make a very good income, but I am home when the kids get home and can take time off to attend things with them.”

A Question of Identity

As Kathryn Gandek-Tighe points out, “Alumnae of my generation who choose to stay home with children are in roles that are not well defined. We are neither the housewives of our grandmothers’ generation nor the homemakers of our mothers’ generation.”

Although we are not defined just by our work, and neither are we defined solely as “so-and-so’s mom” or “Mrs. Husband’s Name,” the shifting of roles and responsibilities can be frustrating. 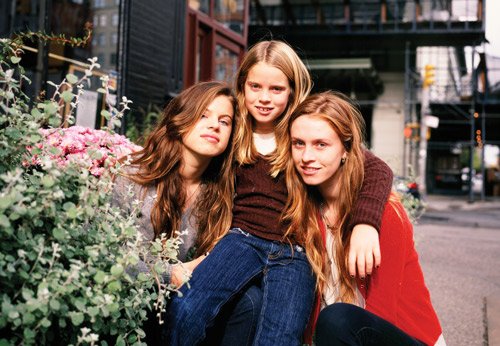 “It is hard to really have an identity because the kids and my husband treat me as  an ‘errand girl’ because they ‘forget’ that I work almost full-time,” Noonan laments. “They will occasionally say: ‘Since you are not working, w
ill you do X?’”

Caroline Jorgensen still smarts while recalling fellow workers at a previous job in college admissions “laughing about my ‘vacation, oh, I mean maternity leave’ after Thomas was born. That maternity leave happened to be some of the hardest weeks of my life.” She didn’t want to “bear with the eye rolls when I had to leave work at five” to pick up her son, so she arranged to read applications from home for Mount Holyoke. Now she writes about children’s activities in Tampa for savvysource.com.

She admits that as a new mom, she “felt totally overwhelmed, insecure, and lost. Working hard and being successful at my career was all that I knew. Now, that regular positive feedback, human interaction, and even the luxury to shower every morning were gone. I didn’t get payment or pats on the back when I pulled an all-nighter with my son.”

But, she says, the benefits are more than enough compensation: “I have been allowed to play an essential role in my children’s early education and development. My first son spent a year in speech therapy, and being home let me work closely with him and be consistent with sign language until his speech was established.”

Shaping a life around one’s children, with or without paid work, can be ideal. But there is a catch: in most cases, you need a partner or a trust fund. I’m facing that reality myself, having been divorced last spring. Although freelance work and alimony are sufficient for now, I’ll soon need to have a regular stream of income and a different health-insurance arrangement. If that can happen with me working out of my home, great. If not, I will have to find childcare for the first time.

And working outside the home would be such a huge change; sometimes I think it would have been better to have stayed in the workforce. But how fortunate I’ve been to be there for days in the park, piano lessons, play dates, and just snuggling on the sofa!

And although sometimes I have felt that my education—at Mount Holyoke as well as my degrees in education and journalism—was being wasted, now more than ever I can draw on it in fashioning a career that fits my family’s needs.

And, as Kristen Wixted points out, in shaping a life that encompasses what’s important. “In the class notes, most people were writing about their postgrad. degrees or their trip to Tibet or their internship at the White House,” she says. “There were days when I felt like, ‘Crap, all I did today was push Becky on the swing and change forty-seven diapers, and here’s Ms. X sampling wines in Tuscany or biking up Mount Hood.’ But you know what? I realized that those people wrote in once, then they went back to their ordinary lives. I decided to make my ordinary life one that I really loved.”

Read another alumna’s take on being a stay-at-home mom, or ask her advice.

Cecily Herzig ’96 has spent the past five years raising her young son, and started a blog/advice column for educated women who have chosen, for a time, to stay home with their children.  Read her blog, Modern Housewife Chronicles, here.

4 responses to “Family Vs. Work: Do You Really Have to Choose?”