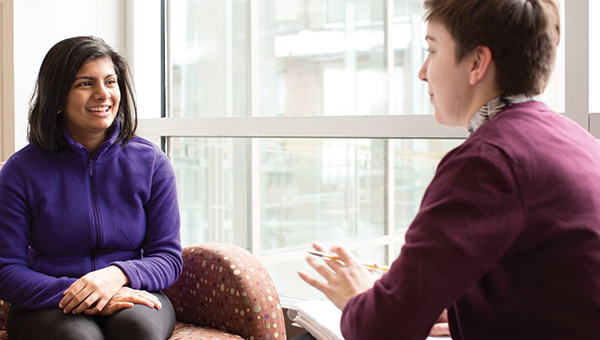 Mackenzie Libbey ’15 loves a good story. And as a Harriet Newhall Fellow—one of a handful of students carefully selected and rigorously trained by Mount Holyoke admission staff to interview prospective students for the next incoming class—she knows that everyone has a story to tell.

Even if sometimes it takes the family dog to help them tell it.

“I was doing a Skype interview once with a prospective student who was really nervous,” Libbey recalls, “and she mentioned that her dog was basically her best friend.” Sensing an opening, Libbey asked for an introduction. “The long and the short of it is that I ended up meeting her dog via video chat,” she says.

After that, Libbey says, the rest of the interview was a breeze.

It’s all just part of the job for a Harriet Newhall Fellow, a program that is crucial to the success of the Mount Holyoke Office of Admission in identifying and connecting with prospective students amid an impossibly competitive college admissions landscape. It’s a job that Libbey adores. 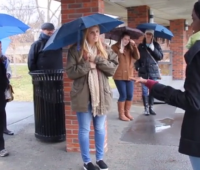 Inside a Campus Tour

Watch a video to get a glimpse of what it takes to put on a campus tour.
Web exclusive

And when it comes to crafting the next class of Mount Holyoke students, it’s these stories that reveal to the admission office what a transcript can’t. What drives the student to succeed? What passions does she most want to pursue? What might she bring to the Mount Holyoke community that no other applicant could?

Admission to Mount Holyoke has always depended on how successfully a prospective student can present her story to the admission staff. And at a time when many of Mount Holyoke’s peer institutions are relying more and more on letting a student’s grades and test scores tell that story for her, the College has put extra emphasis on making a personal connection.

Mary Lou Wirene Bates ’72 is vice president and dean of admission and financial aid at Skidmore College in Saratoga Springs, New York, and has worked in admission for more than forty years. Her career in higher education began when she took a job after graduation as a field representative at the Mount Holyoke Office of Admission.

“When I worked for Mount Holyoke I traveled a lot,” Bates recalls, “and mostly I stayed overnight with alumnae. Sometimes with a different alumna each night.” Most of the admission staff in those days stayed on campus, filling their days with interviewing students and poring over paper applications. Bates spent her time on the road visiting schools and talking to prospective students.

“Now we all travel,” Bates says. “In the fall we might travel five to six weeks at a stretch. Some schools have to work harder to recruit, so they might be out the whole fall.” The logistics of today’s college recruiting travel need to be managed with exquisite care. Shrinking budgets, increasing travel costs, and heated competition among schools have all raised the stakes.

A relentless travel schedule has become all but required for a school to compete in the increasingly crowded landscape of college recruiting. And so much time spent on the road puts an enormous strain on the resources of even the most well-staffed college admission office. As a result, the personal college interview can be the first part of the application to be left behind.

“Many colleges aren’t doing personal interviews at all anymore,” says Bates. Although Skidmore isn’t among them—her team relies on a trained group of part-time workers drawn from the local community to help with the personal interview process—it’s definitely a growing trend. Bates says there are a handful of schools that might offer applicants an optional interview, but they’ll be upfront about the fact that they won’t take it into account when it’s time to make a decision. No details from the conversation will be added to the prospective student’s file. No record of the interview will ever exist. Instead, the admission decision will be based on transcripts, essays, test scores, and recommendations alone.

And a vital piece of each student’s story might be lost.

It’s this vital piece of the story that Mount Holyoke manages to capture with the Harriet Newhall Fellows program, says Karen Osgood, the College’s director of admission and senior associate dean.

Established in 1999 and named for Harriet Newhall, class of 1914, who served as the College’s director of admission from 1928 to 1958, the Newhall program each spring recruits a small group of students to interview applicants throughout the upcoming academic year. Fellows are seniors and must undergo a rigorous application and training process themselves before they’ll face their first prospective student. A Fellow might interview dozens of students over the course of a year, and each conversation will be carefully written up and added to the prospective student’s file.

And yes, confirms Osgood, these reports are absolutely taken into account during the final decision-making process.

Scores of students apply for the fifteen Newhall Fellow positions offered each year. The positions are posted each spring on the College’s internal job board, and juniors are invited to submit a simple resume and letter of intent. Essay questions, much like those demanded of college applicants each year, are designed in this case to highlight students whose academic achievements, extracurricular activities, and passion for Mount Holyoke make them strong ambassadors for the school. 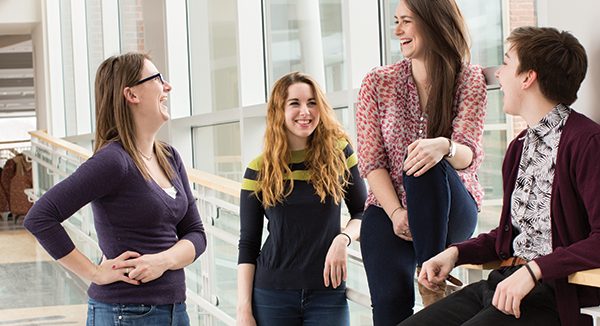 Next comes a series of small group interviews, out of which a handful of applicants are invited back for one-on-one sessions with members of the admission office staff.

“It was almost like applying to college all over again,” laughs Newhall Fellow Dominique Mortimer ’15.

Libbey recalls being interviewed for the Newhall program via Skype while she was studying abroad in Spain.

“It was a pretty involved process, coordinating times and schedules with so many people,” she says. “But it was worth it.”

Senior Emma Murphy also remembers interviewing for the program during her junior year abroad, when she was studying in Nagasaki, Japan. But members of the admission office seemed to take it all in stride, working with her schedule half a world away to help usher her through the process. She thinks it’s no coincidence that so many of her fellow Newhalls are studying abroad, are pursuing double majors, or are excelling as student athletes.

“They’re looking for students who are accomplished and charismatic,” she says, but also “students who are determined to take advantage of every opportunity Mount Holyoke offers them.”

Once the new class of Fellows is chosen, they’re expected to return to campus in mid-August to take part in some intensive training. They’ll spend time honing their listening skills, public speaking abilities, and improvisational finesse.

“They need to be able to think on their feet,” says Osgood, “and to listen for other people’s stories.”

They’ll start by listening to each other’s stories first. They will spend a good deal of time sharing their own personal experiences at Mount Holyoke—what led them here, and what happened next. And, to the surprise of many Fellows, it’s this part of the training that comes in handiest of all.

“By working to shape the next generation, they’re reenacting that part of their own stories, and passing it on.”
Karen Osgood, Director of Admission

Fellow Rachael Smith ’15 explains: “If I’m interviewing a prospective student, and she has an interest in or a question about something I don’t know a lot about, I can share with [her] part of another Newhall Fellow’s story that I learned about in training.” She’ll likely then try to get that prospective student in touch with the Fellow who can answer her question, and will follow up later to make sure the connection was made.

If all of that sounds like a lot of effort to go to for just one prospective student, “It is,” confirms Osgood. “But it’s worth it.”

She says that while the program has paid considerable dividends to the College in terms of better recruiting and a stronger incoming class, it also offers rewards for the seniors who serve as Fellows. The ongoing training that they receive throughout the year does a great deal to prepare them for the professional world.

Mortimer agrees, saying, “This job has given me a more solid sense of what an office job would look like, how I might be a more effective employee, and what I need to do to invest in my own training and career.”

While the training she received in another Mount Holyoke-supported internship provided her with valuable skills, Mortimer believes that the skills she’s honed as a Newhall Fellow have been the ones she’ll rely on the most as she launches her career.

And the job can offer a surprisingly calming effect during a stressful senior year. Newhall Fellows frequently reflect on how energizing it is to interact with aspiring Mount Holyoke students.

“It’s definitely refreshing work,” Mortimer agrees. “It’s allowed me to reflect on the reasons I chose to come to Mount Holyoke in the first place.” She also strongly believes that her experience on the other side of the interview desk has given her a distinct advantage as she applies to law schools for next year.

Osgood says that the program is getting noticed by other admission offices now, too. The Harriet Newhall Fellow program is fast becoming a model for colleges and universities that want to bring the personal interview back into the application process, and who want to encourage current students to take a more active role in crafting the character of a future class.

It’s a virtuous cycle, she says, in which students are remembering the reasons they came to Mount Holyoke, refining and relating their experiences as Mount Holyoke women, and recruiting those who will take up the reins once they’ve graduated and moved on. 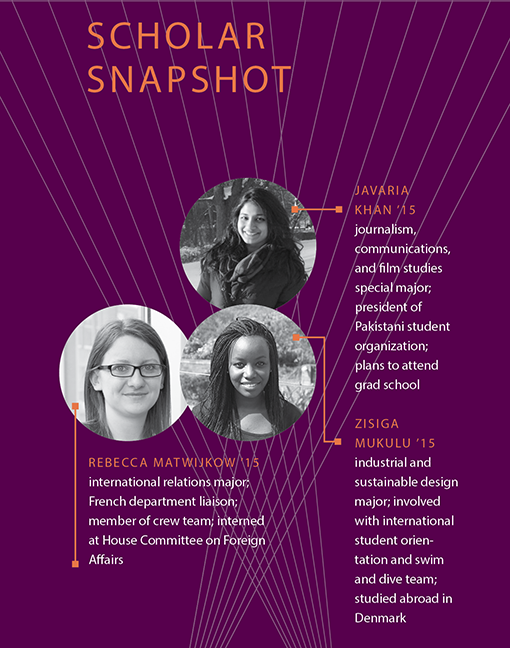 Newhall Fellows aren’t the only members of the Mount Holyoke community that prospective students have access to during the application process. Candidates chat with current students and staff during informal group discussions on campus, share lunch with students in a dormitory dining room, schedule an overnight visit, or attend classes with students during the day. Candidates who can’t make it to campus can attend one of several group Skype chats offered throughout the year, or interview with a volunteer alumna nearby.

Every point of contact provides an opportunity for a candidate to hear another side of the Mount Holyoke experience, and to imagine how her story might play out here.

For Dianna Tejada ’15, that’s what she enjoys most about her job as a campus tour guide, another key role played by current Mount Holyoke students who go on to influence future classes.

“It’s all about representation,” she says. “It’s about showing prospective students that there’s a place for them here.”

She particularly enjoys talking to prospective students who have concerns about what it’s like to be a minority on campus, or a member of any traditionally underrepresented group. By sharing her own experience as a queer Dominican woman of color, she says, “I get to show them that Mount Holyoke truly values and supports diversity.” Those conversations carry more weight, she believes, than any statement you might scan on a website or read in a brochure.

“It’s different when you can offer them your own personal story. When you can bear witness to the truth of who you are, and to the person you’ve become in this place.”

“So many of our students find their passion here,” says Osgood. “They believe that Mount Holyoke helped make them into the women they’d always wanted to be. And by working to shape the next generation, they’re reenacting that part of their own stories, and passing it on.”

Beth Dunn ’93 is a writer and editor at HubSpot, a marketing software company based in Cambridge, Massachusetts. She lives on Cape Cod and blogs at bethdunn.com.