Campus legends and ghost stories have endured the test of time at Mount Holyoke. From ghost sightings in Wilder to faint mysterious noises in South Mandelle, many students and alumnae have experienced or heard of supernatural occurrences. 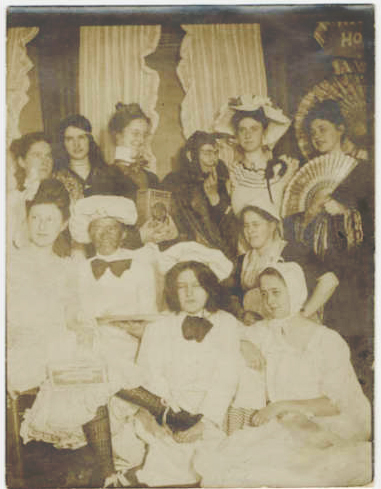 In this legend, a young woman waiting for her date to the commencement ball was so distraught upon hearing of his tragic death that she hanged herself from the rafters of Wilder. In an alternate version, the student was pregnant by her Amherst boyfriend and this was the motivation for her hanging. One of the most enduring legends on campus, the date of this incident ranges from the late 1800s to the 1940s. This woman is sometimes connected to a portrait that used to hang in the Wilder common room and is often referred to as the Woman in White. She supposedly appears whenever there is a dance on campus.

BUSTED: According to the original floor plans and college records, this room in Wilder was never used as a student room. Its eaves are too low, the chimney runs through it, and the floors and walls are completely unfinished. Also, the portrait that is purported to be of this woman was painted by the husband of an alumna, class of 1890, and wasn’t given to the college until 1963.

Among the more conjectural stories told on campus is the one about an affair between Deacon Porter and Mary Lyon. Deacon Porter was instrumental in constructing the original seminary building and had a huge role in supporting Mary Lyon’s mission. The basic version of the story is that their affair was discovered by Porter’s wife (listed by several sources as Clara) and she become furious and vowed to get her revenge. Unfortunately, she died young from grief, and there was a commemorative portrait painted of her and hung in Porter Hall. A student gazed too deeply into the eyes of the portrait and became insane, eventually committed to a mental hospital in Belchertown.

Additionally, some say that when Deacon Porter married his wife, he swore that he would eat his hat if he were ever untrue to her. When Ms. Porter found out about the affair, she invited Mary Lyon to dinner and very pointedly served a steamed pudding that looked exactly like her errant husband’s stovepipe hat. To Ms. Porter’s dismay, Lyon thought the dessert was delicious and declared that it should be served to students in honor of his contributions to the seminary.

BUSTED: First of all, Ms. Porter’s first name was Hannah, not Clara, and she didn’t die until 1869 when she was seventy-two years old. Second, it is undeniable from what we know about Mary Lyon and Deacon Porter that they worked together closely and had a friendship. However, Mary Lyon was a deeply religious woman who turned down two offers of marriage. Her life’s goal of operating the seminary would have been jeopardized by actions as scandalous as an affair. Based on knowledge of their characters and the highly speculative nature of these stories, we affirm that these allegations are highly unlikely.

This student, allegedly a senior who was in danger of not graduating due to poor grades, was so overcome by her distress that she dramatically tied a rope around her neck and plunged to her death as she simultaneously stabbed a dagger into her heart. The first classmate to walk across the bridge heard a cry from below: “Help me! I’m down here!” When the body was recovered, she had been dead for at least an hour before her cries were allegedly heard.

BUSTED: This story is a simple one to contradict. Nowhere in our records exists a story as outrageous as this one. This is one of the many myths that serves as a warning against students getting carried away by their perceived academic failures.

There is a rumor on campus that Torrey Hall used to be an asylum for those with a variety of mental and emotional disorders.

BUSTED: The true history of Torrey is that it was newly constructed in the late 1940s under the authority of President Ham. The building was originally called Lakeside due to its location alongside Upper Lake and was hailed as an attractive and thoroughly modern building at the time of its completion. The dorm is named after Louisa May Torrey, a student at Mount Holyoke during the year of 1843–44 and the mother of US President William Howard Taft. 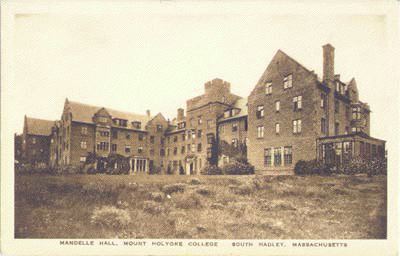 A group of students allegedly decided to host a seance in the common room of North Mandelle. They built a fire in the middle of the room and began their ritual. The portrait that gazed at them from over the mantle was reported to be Mary Mandelle, who donated the money for the construction of Mandelle Hall. As the ritual progressed, the portrait began to shake and rattle, finally tearing itself from the wall and landing in the fire where it was severely damaged. The eeriest part of the story is that Mary Mandelle died when her house on Prospect Hill was burned to the ground.

The subject of the portrait is also said to have shifted in the frame and “tutted” or wagged its finger at students. The painting was brought to the art museum to be restored but was never replaced in North Mandelle.

BUSTED: Mary Mandelle never lived on Prospect Hill. She was a resident of Detroit and had never visited Mount Holyoke when she donated her money. In addition, the portrait that was reported hers was donated before Mandelle Hall was built and is not attributed to her likeness. 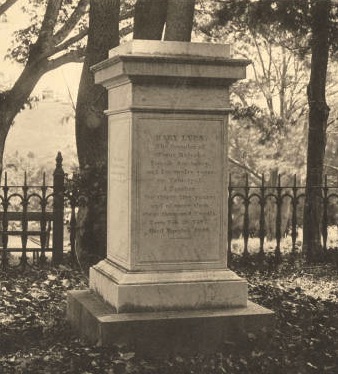 Controversy surrounding Mary Lyon’s grave is one of the most enduring legends on campus. Is she really buried under her stone memorial near Hooker Auditorium? There are several stories that account for her burial, but they all agree that after her death in 1849 from a fatal case of erysipelas, a skin infection, her body was displayed in the seminary as students and faculty paid their respects.

After this point, one version states that she has been taken back to her hometown of Buckland, Massachusetts, to be interred there. Whether this was done with the full knowledge of the Mount Holyoke community depends on who you ask. Some people say that the students wanted her buried on campus but the board of trustees didn’t agree, and spirited her away to Buckland against their wishes. The most exciting recounting states that students from Wheaton Seminary stole the body.

Mary Lyon was a consultant at Wheaton when it was first formed, before founding Mount Holyoke Seminary. As the story goes, Wheaton students snuck to the gravesite and somehow managed to spirit the body away, either before it was buried or by digging it up.

BUSTED: From journal entries and letters written at the time of Mary Lyon’s death, the possibility of her being buried in Buckland or of her body being stolen from campus seems quite impossible. Her body was laid out for the entire student body and faculty to pay their respects before she was interred. This journal entry from a faculty member implies that the entire campus saw her buried:

“From church the long procession moved to the grave. This is on the seminary grounds a little south of the orchard. . . . It is gratifying to our feelings and seems peculiarly appropriate that the grave should be on our grounds instead of in the common burying ground.”

This quote also reveals the devotion of those who knew Lyon and their desires that she be put to rest in the space that she devoted so much of her life to creating. To further demonstrate the difficulty of robbing her grave, the evidence stands that her casket was placed in a stone vault, which was then sealed with cement and topped with an inscribed marble memorial place.

—With help from Camille Malonzo ’16