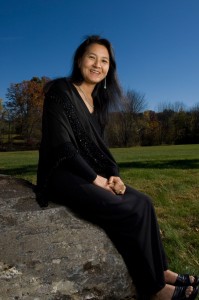 Many an alumna has been described as “following in Mary Lyon’s footsteps,” but the comparison fits Tashi Zangmo FP’99 better than most. Zangmo, a citizen of Bhutan— where many girls still lack even a primary school education— says her life’s work is to elevate the standard of female education in her country. And the parallels don’t end there. Both Lyon and Zangmo were raised in small villages, yet became highly educated women when this was rare in their society. Both aimed to create something large and lasting to benefit girls and women; and spirituality is central to the visions of both educational reformers.

When Zangmo was growing up in one of the most remote corners of mountainous Bhutan, she says, “girls never went to school.” She was the first girl ever sent to school from her community. Her father was a community spiritual teacher, but her mother was illiterate, and Zangmo recalls the decision to send her to school as “a big leap for my mother and me. The only school was a one-day walk from my village,” so the nine-year-old Zangmo left her family and moved there. “I had to room with boys, the teachers weren’t used to working with young girls … it was a horrible experience, but that’s not important,” Zangmo says.

What is key is that those early classroom days inspired the adult Zangmo to help other girls have a better experience than she had. “Even when I was making hardly enough money to feed myself, there was a vision that I could do something down the road to help girls get a better education in communities similar to mine. I want to be a role model,” she says.

At first, Zangmo envisioned just helping her seven siblings, but as her own education progressed, she says, “my vision grew from family to community, and now I think of how I can serve my country best.”

Although Zangmo humbly deflects credit for her ideas, her goal is nothing short of changing Bhutanese society by improving girls’ education. After receiving her doctorate from UMass–Amherst this past December, she moved back to her homeland and founded the Bhutan Nuns Foundation, under the patronage of Queen Ashi Tshering Yangdon Wangchuck.

To grasp why supporting nuns’ education also means educating girls generally, it helps to understand evolving Bhutanese beliefs about girls and education. A 2002 estimate by UNESCO held that twice as many boys as girls attend school in Bhutan, putting the rate of girls in school at just 10 percent. Since then, access to primary education has been a royal priority. According to UNICEF, the number of students has more than doubled since 1990, and girls’ enrollment is expanding steadily.

However, significant gender gaps remain in practice. Often, students still must travel considerable distances to find a school, and tradition holds that girls and women should stay near their families.

Zangmo’s plan? Since you can’t easily bring all girls to a school, take schools to the girls. With Buddhist nunneries in many rural locations that lack schools, that’s where her efforts are focused. Nunnery-based education also has the advantage of being free. (Government-run schools require families to pay for uniforms and supplies. This makes schooling beyond the reach of many, especially families with numerous children.) And working with nuns seemed natural to Zangmo, a practicing Buddhist who says she comes from “a very spiritual family.”

“Nunneries [already] provide women from all walks of life with an educational opportunity that has no age or learning capacity limit, as the formal education sector does,” she explains. “If the nunneries provided good education, nuns and other girls and women coming to the nunneries would be empowered and be in a better position to contribute to their communities,” Zangmo reasons. “Nuns in turn could become teachers and social workers within their villages and their nunneries, and contribute to the larger national development goal of raising ‘Gross National Happiness.’”

The problem is that nunneries, while often one of few alternative educational institutions open to females, typically provide a very poor learning environment, Zangmo says. “In some, there is no electricity, no bathrooms, no curriculum, no qualified teachers—nothing.” Still, it’s often the only game in town, so there are about five times as many girls seeking admission as there are openings, Zangmo estimates. Sadly, those admitted are likely to gain little academic substance from the country’s 800 to 900 nuns. “It breaks my heart to have families send their children there with the hope of learning only to discover that there are no learning facilities,” she says. “But something can be done. My vision is to give the nuns teacher training.”

And the first glimmers of this vision took shape at Mount Holyoke, where Mary Lyon’s goal was similar. “I had no clue what Mount Holyoke College was all about when I applied,” Zangmo admits. “But I read Mary Lyon’s book, and it really spoke to my heart. Professor Penny Gill used to say, ‘Mary Lyon calls you,’ and that helped me articulate my vision.”

Zangmo started helping the nuns back home more effectively during her time at MHC. Babysitting earnings bought clothing and better drinking water for the nuns in her native village. She used a $10,000 Samuel Huntington Public Service Award to start a small library there, and Zangmo spent about two years teaching adult literacy classes in Bhutan after her graduation. In 2005, the minister of home and cultural affairs in Bhutan heard of Zangmo’s efforts, and asked her to propose a systematic way to improve girls’ lot. She brought him a proposal on notebook paper and, with the minister’s support, came up with the beginnings of the Bhutan Nuns Foundation.

Back in the US for her PhD work, Zangmo formed an advisory group and raised seed money for the foundation. She launched it officially this winter by moving back to Bhutan, opening an office, and hiring a coworker. “There is a lot to be done!” she says, reciting a litany of goals that include improving nuns’ living conditions, building a structured curriculum, training nuns to teach both at the nunneries and in the public school system, and creating a higher-learning center open to all women.

“Ten years from now, I envision that the foundation will have improved the lives not only of the nuns but also of every girl and woman in Bhutan,” she says.

There was no such help when Zangmo wanted to further her own education. After high school-level studies, Zangmo knew that, in Bhutan, “unless I became a nun, there was no opportunity for me to do further Buddhist studies.”

She had to break with tradition, earning money in a secretarial job for the government, then leaving her family and moving to India, where she studied Buddhist philosophy. “My family said, ‘Why would you leave that [job] and go?’ I said, ‘Don’t worry, I’ll do even better than this!’” She earned a BA in India, then completed a second bachelor’s degree at MHC.

While her own educational track was rare and radical, Zangmo believes that her country is now ready for sweeping advances that will enhance education for all girls and enlarge the nuns’ role in society.

“While respecting and preserving our traditional culture, we cannot expect the nuns to stay where they were centuries ago,” Zangmo says. “The whole country is moving toward modernization and globalization, and we want to include nuns as part of the development agenda so they’re not left out in the twenty-first century.

This is especially true since preserving culture, spirituality, and tradition is one of the common threads within Bhutanese society and one of the main pillars of ‘Gross National Happiness.’”