Is Being Lesbian Hazardous to Your Health? 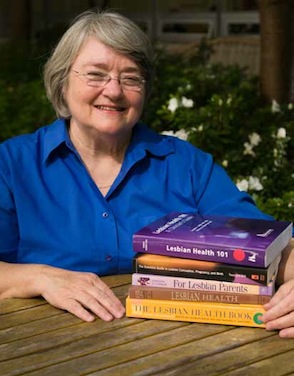 The state of lesbian healthcare is like the classic cartoon in which a doctor says to a patient, “Well, I have good news and bad news …” According to Patricia A. Robertson ‘72, a physician and professor in the Department of Obstetrics, Gynecology, and Reproductive Services at the University of California–San Francisco, the good news is that lesbians are no longer totally invisible to the medical community. Research has revealed many areas in which lesbians’ health differs from straight women’s health, and those differences have important implications for treating individual patients. The bad news is that research findings about lesbians’ health are sobering.

While all women have the same basic anatomy, research has shown that, when compared with straight women, lesbians

• are less likely to get regular health screenings;

• are more likely to smoke, become depressed, abuse alcohol and other drugs, and be overweight;

• are more likely, as young women, to have unintended pregnancies;

• are more likely, as young women, to develop the sexually transmitted infection Chlamydia, which can cause infertility in later life;

• are as likely as heterosexual women to be the victims of domestic violence.

Yet even those discouraging findings represent progress, Robertson says, because just a few decades ago, there was no scientific research about what health issues might be more common in lesbian patients.

Robertson remembers how frustrating it was to talk about lesbian health as a young doctor in the 1980s. “In my work as an obstetrician-gynecologist, I used research studies to justify how I provided care to my patients, but I didn’t have evidence-based guidelines about lesbian health then. All I could say to other practitioners was, ‘Be nice to your lesbian patients.’”

The Center for American Progress notes just how little research has been done on LGBT health: A review by Ulrike Boehmer of twenty years of medical research revealed that only 0.1 percent of the 3.8 million citations published between 1980 and 1999 related to LGBT issues. And 80 percent of those articles focused on men.

Slowly, a critical mass of research in lesbian health outcomes emerged. “Not enough,” Robertson is quick to clarify, but enough to form the basis of the new 500-page book Lesbian Health 101, which Robertson coedited with Suzanne L. Dibble, RN, DNSc. Though the book is intended primarily to guide clinicians in their work with lesbian patients, Robertson hopes that lesbians also use it to educate themselves and advocate for improving their own healthcare.

Despite its detailed guidance on everything from fertility options to palliative care, the book can’t answer one huge question—why are lesbians more likely than other women to suffer some health threats? Robertson points to several possible reasons: the stress of daily discrimination, internalized homophobia, government and business practices that deny lesbian partners health insurance, and plain old bad doctoring. Teasing out the strands of correlation and causation in future studies, and using the results to improve the health of lesbians, are the next steps in this emerging research field.

There is “a complex web of factors” behind many lesbian health issues, according to Robertson. “For example, we know that lesbians who have had a homophobic experience at a physician’s usually don’t go back for a follow-up. But is this why lesbians get clinical breast exams less often than heterosexual women? We don’t know. And we know that 90 percent of lesbians have sexual relationships with men [at some point in their lives]; that lesbians are more likely to have alcohol and drug issues; and that lesbians are less likely to have partners use condoms when they do have heterosexual sex. But do these things cause the higher rate of unintended pregnancies among young lesbians? We don’t know.”

It’s no secret that not everyone approves of or is comfortable with homosexuality. That includes healthcare providers, of course, which can lead to encounters running the gamut from awkwardness to inappropriate treatment. (See sidebar.) With some doctors, Robertson says, being lesbian can be hazardous to your health.

For example, she recounts the experience of a young woman from Montana who, for medically relevant reasons, told her physician that she was attracted to women. By the time she got home, the doctor had called the young woman’s parents, and they took her to a program aimed at changing her sexual orientation. “That experience kept her away from getting a Pap smear for ten years,” Robertson reports.

She has also heard more than once that, when a physician is doing a medical history and the patient comes out as lesbian, the doctor leaves the room and has a medical student or nurse finish the medical history. “That kind of treatment has a huge effect on the patient … and can really increase the distrust lesbians have of our healthcare system.”

Is that distrust paranoia? Robertson cites a recently published research finding that 74 percent of physicians surveyed had heard colleagues make disparaging comments about LGBT people. And even if actual harm is uncommon, the fear of bad treatment is real and runs deep. “LGBT people are afraid to go to doctors. They’re afraid they’re going to die because there’s so much prejudice that the health provider will not treat them appropriately,” Robertson says. “After all, they’ve been told their whole lives they’re not important.”

Perhaps the most provocative unanswered question is: If anti-gay discrimination didn’t exist, would we still need different healthcare for lesbians? Robertson believes that, while special methods of conception for lesbians would obviously still be required, “you could probably wipe out a majority of health issues for lesbians” if bias went away.

Robertson is not just waiting for that day; she’s helping to train future doctors who are knowledgeable about, and sensitive to, LGBT health issues. She helped institute LGBT healthcare education as part of the formal curriculum for all medical students at UC–SF, based on research she published in 2008. It showed that even “a single two-hour session for second-year medical students—involving a panel of patients, background reading, and small-group discussions with LGBT faculty—can change attitudes.”

“Having lesbian health education as a standard in the medical school curriculum is huge. I’ve finally been asked to write questions on lesbian health for the national board exams,” she says. “I’m seeing awareness of homophobia grow, and I have more speaking invitations than I can accept. That’s a sign that the mainstream is engaging.” Still, she eagerly awaits the day when all lesbians receive sensitive, nonjudgmental, and appropriate health care; in other words, when lesbian medical care gets a completely clean bill of health.

Take Our Word for It

The personal stories shared by these lesbian alumnae (some of whom asked to remain anonymous) suggest both the challenges lesbian patients still face, and the fact that lesbian-friendly healthcare is becoming more common. Healthcare stories from many more alumnae are online at alumnae.mtholyoke.edu/lesbianhealth.

• I have stayed away from gynecologists for the past twenty years because of the treatment I received as a gay woman; it was generally snide and inappropriate. Now, some doctors don’t blink or respond negatively, and that’s a huge relief. Because for most of my adult life, I had to worry not only about [my] medical problem, but also about how my sexual orientation would affect the quality of the care I would receive.—Pam Thiele ’70

• I have had relationships with both men and women, yet I was told by a primary-care provider that I did not need to undergo routine Pap-smear testing because I was dating a woman.—Sharon T. Smith ’05

• More than twelve years ago, my partner and I went to the Advanced Reproductive Medical Clinic at the University of Connecticut. It took a year and a half and both of us trying before I became pregnant. We were treated with as much compassion, dignity, and respect as I imagine any other couple encountered.—a 1990 alumna

• For me, good healthcare has not been about being a lesbian but about finding the right physician that can help me, regardless of their gender, my sexual orientation, or any other ancillary aspect of our doctor-patient relationship … Doctors who treat with any bias are just bad doctors.—Laurie A. Cagnetta ’82

• It was awkward and hard to have to “come out” over and over again when I moved, and I moved almost every year.—Elizabeth

• Back in the early 1980s, a gynecologist … strongly urged me to get an IUD, “in case you change your mind.” In the late 1980s, I had a chiropractor stop an examination in the middle when I told him I was gay. He left the room; I got dressed; I yelled at him and left. I have no idea why he was so upset; perhaps he thought being gay was contagious.—Pam Thiele ’70

Take two suggestions and call me in the morning

How can you find an LGBT-friendly doctor? How can healthcare providers be more inclusive? Dr. Robertson’s suggestions are online at alumnae.mtholyoke.edu/lesbianhealth.

Health Disparities at a Glance

The charts below are excerpted with permission from the 2009 article by Jeff Krehely, “How to Close the LGBT Health Disparities Gap,” published by the Center for American Progress (www.americanprofress.org). See alumnae.mtholyoke.edu/lesbianhealth for the full article and citations.

• LGB adults are more likely to delay or not seek medical care.

• LGB youth are more likely to be overweight.
% of youth who are overweight
6% Heterosexual Youth
12% LGB Youth

• LGB adults are more likely to have cancer.
% of adults ever diagnosed with cancer
6% Heterosexual Adults
9% LGB Adults

This article appeared in the winter 2011 issue of the Alumnae Quarterly.