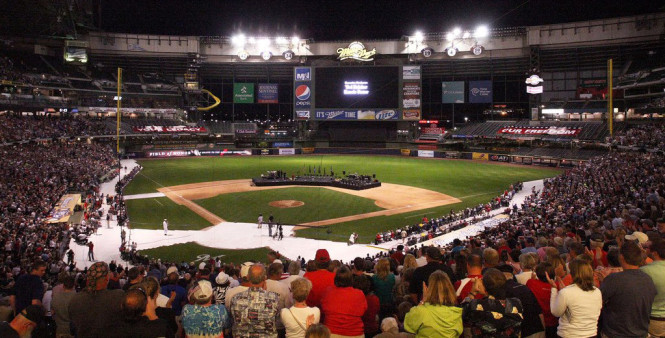 Honor Flight gets a standing ovation from its record-breaking audience.

What film attracted the largest movie audience in US history?  Not Star Wars, Avatar, or some other pop-culture blockbuster, but Honor Flight, a moving documentary about four elderly World War II veterans hoping to visit the DC memorial built to honor them. Volunteers make these “honor flights” possible, and provide for some the very first “thank you” received for their military service.

It was Jo Jensen’s job to pack Milwaukee’s Miller Park Stadium with viewers for the film’s August 2012 premiere. Her marketing efforts for the film’s creators, Freethink Media, were so successful that the Guinness Book of World Records certified that it was biggest audience—28,442—ever at a film screening.

“My background is in marketing and grassroots organizing, and I apply that experience to getting ‘butts in the seats’ for screenings, whether it’s in a baseball stadium or at the US Capitol,” says Jensen.

Selling out the park wasn’t easy. “I was nervous at first and didn’t know if I would be able to reach that goal, but I approached the task the same way I wrote a twenty-page paper as a student: I would write four, five-page papers,” the former politics major says.

Her marketing strategy included letting Olympics-focused audiences know “You don’t have to go to London this summer to see a world record broken.” She urged folks to “Do more this Memorial Day.” She lobbied Washington politicos, drew thousands through veterans’ groups, and recruited celebrities including Kevin Bacon to promote the event.

It worked. They sold 10,000 tickets the first day alone, and the park was filled to capacity for the record-breaking screening of a film said to give World War II vets a welcome home they long deserved.

Jensen is now spearheading an effort to bring the film to audiences elsewhere. It is scheduled to play in more than a dozen states so far. Money raised at the screenings will fly more vets to the WWII memorial this spring.
—By Emily Harrison Weir 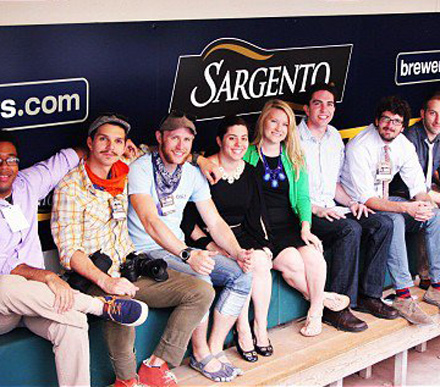 Jo Jensen ’07 (4th from left) with the
Honor Flight team at the film’s ball-park premiere.

• For more information about the film, or to arrange a screening near you

• View a photo from the film’s premiere