Judith Voris Reppy ’58: A Dedication to Peace is Honored 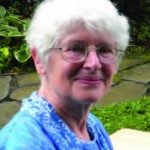 Professor Judith Voris Reppy ’58 was greeted with a standing ovation. A celebration in April 2010 marking the fortieth anniversary of Cornell University’s peace studies program coincided with the retirement of the professor emerita—a fitting occasion for renaming the program the Judith Reppy Institute for Peace and Conflict Studies.

For example, Judith noted that a PhD candidate is currently writing a thesis on the image of a symphony orchestra as a metaphor for eighteenth-century political discourse. “In almost any discipline,” Judith says, “you’ll find a substantial body of scholarship concerned with peace issues.”

Judith’s journey into the field of peace and conflict research began with her economics degrees—as an undergraduate at MHC, earning an MA from Yale, and later receiving her PhD from Cornell. When looking for a job teaching economics, Judith hit a wall in finding available positions. However, Cornell offered her a position as research associate in their new peace studies program.

“Economists interested in peace studies were in short supply, and they needed one,” she explains.
During more than thirty years at Cornell, Judith’s courses have run the gamut of government studies, science and technology, as well as economics—all related to the politics and policies of war and peace.

“The reason I’ve stayed with it and am so happy to have a career associated with the peace studies program is that there’s a lot of work to be done—with policies that can be applied, addressing questions that actually matter.”

When the idea of naming the peace and conflict studies institute in her honor arose, Judith admits to being caught off guard. But she came to realize that, with the trend in naming centers and buildings after financial donors, to have Cornell distinguish one of their own was laudable. “It’s a good idea to recognize a foot soldier occasionally.”—K.H.