To Estrange Yourself from Yourself: Remembering Professor Kavita Datla 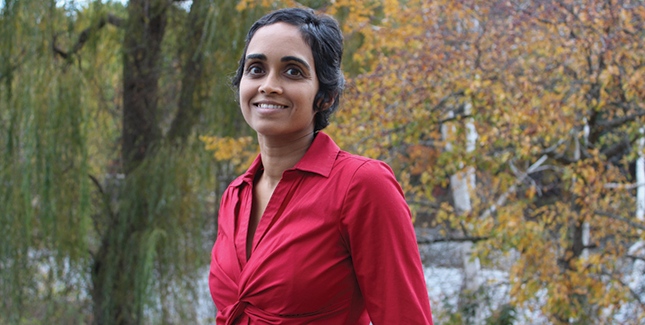 Professor Kavita Datla, who passed away July 22 after a long illness. Photo courtesy of MHC Office of Communications

Professor Kavita Datla would reach into my mind, grasp the core of what I wanted to say, and help me bring it to the forefront of my work. I would step into her office gingerly, with my heart in my hand, scared after delaying another thesis chapter, or afraid she may have decided I was not a good enough writer after all. An hour later, I would step out awed and relieved, trying to hold on to her exact words so I could retain that “a-ha” moment of pure, unflinching clarity I felt while listening to her. She spoke in a calm, even voice, with keen eyes, and a half smile. She would pause sometimes, to carefully select words for her next sentence, or to take a sip of her coffee. She was the only professor I had who pronounced my name right, taking her time with each syllable, rolling the “r” gently and firmly.

Professor Datla taught a series of classes on the British Empire and its impact on modern South Asia. I studied with her for several semesters, but my favorite class was her seminar called History of Women and Gender in South Asia. It felt like one long epiphany to me. I learnt something new every week about the rigid gender codes I grew up with in Pakistan: why property laws seemed biased, why societal “respectability” was tied to conservative dress for women, why women’s passports carried a male guardian’s name; how British colonial legacies had shaped many of these realities.

In my own family, financial anxiety and domestic violence were two of the only constants for women. But before studying with Professor Datla, I did not know that these difficulties were part of a long, winding historical narrative.

I pieced together the jigsaw pieces of my own mother’s life—married at twenty-three, mother at twenty-four, primary breadwinner, fiercely independent writer outside the home, abused and assaulted inside the home—against the backdrop of Professor Datla’s syllabus. When we watched a film that portrayed physical violence against women, I went to Professor Datla and asked for help in separating the personal from the academic. How do I complete my assignment on gender-based violence without spiraling into gloom, recalling the times I crouched in a corner to wait for a blow, or saw my mother be pushed and shoved?

“You have to estrange yourself from yourself,” Professor Datla told me. “We pick themes that help us make sense of our experiences. It is natural for you to pick a subject that is personal. But once you have begun your study, establish boundaries. Estrange parts of yourself from your work. Estrange yourself, from yourself.” I wish I knew then how often I would go back to those words, in an attempt to transform moments of weakness into anything resembling strength or discovery.

Professor Datla was unafraid to voice her opinions in class and beyond. We once spent a three-hour seminar talking about on-campus activism, and she spoke in favor of student organizers in a clear, ringing, tone. She supported those who spoke out against racial microaggressions, and stood alongside them in holding college staff accountable. She cited instances in which professors and administrators had disappointed students in the past, and brainstormed ways we could move forward. It is not enough to be proud of our school’s diversity, she said, if we were not constantly striving for true inclusivity.

In spite of her candor during difficult conversations, Professor Datla was private, somewhat detached. She was deeply committed to her students, responding to us so thoughtfully during classroom discussions that I spent many hours typing furiously, trying to transcribe her every word. At the same time, she retained a gentle distance. She was at once intimate and aloof.

She rarely talked about her illness, even when she had to delay grading exams in fall 2014, or take a last-minute sabbatical in spring 2015. While she was home and recovering in April of that year, I reached out to her to discuss the possibility of a senior thesis on British indirect rule in twentieth-century African colonies. I was convinced she would say no — she had too many things going on. Instead, she spent several hours on the phone with me, asking questions, dissecting answers, offering names of books I could read, explaining how I could outline my chapters. She never alluded to her absence from campus or the hardships she was facing. Instead, she warned me that I had to meet her standards for what qualified as original writing. “Spend your summer reading, and your fall writing. But your work will not be a thesis until I call it a thesis,” she said. She made it clear that the main catalyst was my own ability to stick to my goals. Neither of us knew then that this would be the last thesis she mentored.

The following year, I spent an hour each week in Professor Datla’s Skinner Hall office, soaking in mid-afternoon sunlight that filtered through her window, trying to reconcile my love for working with her, with the “real-world” callings of senior year. I missed every deadline, sending apologetic emails that Professor Datla did not answer. At one point, I felt like I could not possibly read all of my primary source material while trying to find a job. I suggested using a natural language processor — maybe an algorithm could select which pages I read and which pages I ignored. Professor Datla issued a firm “no,” and I returned to her a week later with a new chapter outline, having read eight hundred pages since our previous meeting. I was embarrassed by the incident, until she brought it up at a History department end of year event. Turns out she was half-amused, half-proud that I had found a way to finish my readings by myself. I listened to her recount what in my memory was a cringe-worthy moment, as a kind of triumph. I had been her student for several consecutive semesters, but it was the first time I realized she might like me. The idea was overwhelming, too good to be true.

The last time I saw Professor Datla was at my thesis defense. It was the last day of finals, and of my undergraduate career. I sat in the international relations lounge across from four professors, trying to keep my gaze on Professor Datla, who wore a long dark skirt and a composed, encouraging smile. When I left the room at the end of the hour, Professor Datla followed me into the hall shortly after. She told me I had passed my defense and raised her arms to offer a hug, in an unprecedented gesture of affection.

In the time we spent together, I learned what she thought about a myriad of topics: her love for the Urdu language, her take on political upheavals in South Asia, her disdain for “skimming” readings, her preference for half-caff mid-day Keurigs, her amusement when students (like me) spent summers doing corporate internships, and came back to campus hungry for soul-nourishing academic projects. We talked about how she chose her readings, what historical research methods meant to her, why she insisted I get words onto a page before making sure they were the right ones. But we never discussed her illness.

It seems bizarre at times, because her cancer more or less spanned our relationship. But I suppose she was not the kind of person to let anything stand in the way of being her most attentive self for her students. Perhaps her illness never came up because it was peripheral to her teaching. No matter the strength of the disease, her guidance was as absolute and her presence was as palpable as it had ever been, down to the last day of my student career, down to our last email exchange a couple of months before her death, when she helped me with a recommendation.

5 responses to “To Estrange Yourself from Yourself: Remembering Professor Kavita Datla”