Photo Gallery of Knitting through the years at MHC 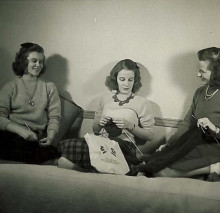 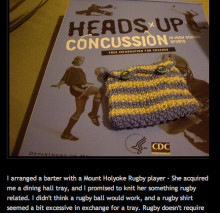 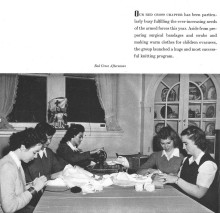 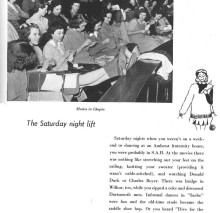 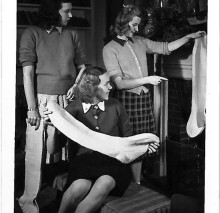 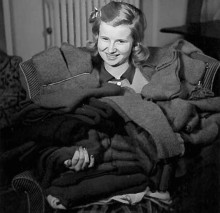 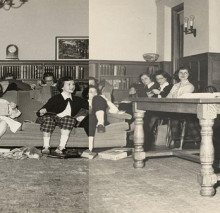 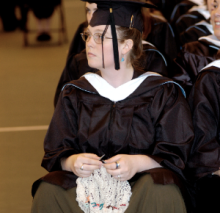 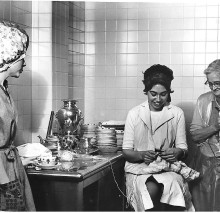 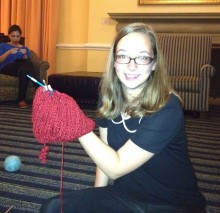 The North Rockies common room is the coziest place on campus every Tuesday night. Warm lamps glow yellow. Knitting needles clink softly and are just audible over the hum of chatter and laughter. Pockets of women are curled up in upholstered chairs and sprawled out on the floor. They’ve come to knit.

Mount Holyoke’s knitting club Knit Happens is flourishing. The group formed last year after current-president Larkin Turman ’15 and her floor mates discovered their shared passion for yarn arts. They thought, “why not have a club, instead of just sitting in our rooms knitting by ourselves,” she explains. Initially, it was just the original group of roommates hanging out, knitting, and watching TV in the common room, but slowly more students were roped in by their desire to learn the craft. “We wanted to have a place to support new knitters,” Turman says.

This fall, the group has more than tripled. Their original mailing list was just twenty names and now their weekly email reaches over seventy students.

This burgeoning bunch has no plans to put down the needles any time soon. “This year we want to start doing charity knitting,” says Amanda Lueke ’15, vice president of Knit Happens. Together, president and vice president start rambling off a list of charities they’d like to contribute to. Homeless shelters, animal shelters, and children’s hospitals are among the organizations looking for comfy donations. “Knitting is very therapeutic for us,” Turman explains, “but you also have this product at the end.”

On one recent Tuesday most knitters are stitching practical projects: socks, scarves, and hats to fend off the approaching New England winter. Sometimes, though, when the group is feeling more creative, they will knit wackier fare. At past gatherings, people have made coasters, doilies, laptop cases, and crocheted flowers. To raise funds this year, the group plans to make and sell amigurumi, a Japanese word for small, knit stuffed animals. 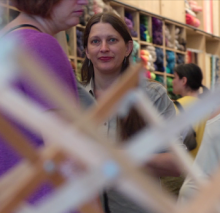 What About that “Turtle Sweater”?

In the article, the author mentions knitting a sweater with a turtle design for her then-boyfriend (now husband), nicknamed “Turtle.” He still has the sweater…here it is. 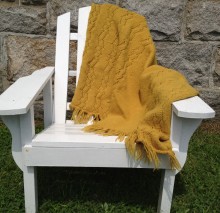 The antique gold afghan Lynne made for her mother while at MHC. 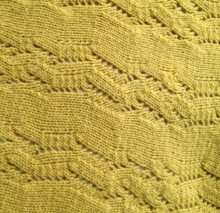 Close-up of the gold afghan.

Comment: Apropos “Strands of Time” in the fall Quarterly, here’s what I learned to do in college. Actually, I really believe that occupying my hands and the other scattered parts of my brain helped me to concentrate in class.
—Ellie Rogowski Landowne ’56

One response to “Knit Happens: Where Yarn Nerds Unwind”