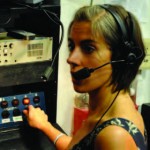 If Kristin Colvin Young ’97 does her job well, no one will notice. As stage manager for the Alvin Ailey American Dance Theater, she is in charge of everything an audience experiences except for the actual dancing. From the reminder to turn off cell phones before the curtain rises to the last curtain call of the night, Kristin “calls” the performance from her backstage perch.

And nothing happens on stage until she cues someone to make it happen. “I run a tight ship,” she says. “If we have two minutes to make a change, we’re ready in one. The audience shouldn’t notice anything except ‘That was amazing.'”

A dance and sociology double major at MHC, Kristin impressed choreographer David Parsons during an internship at Jacob’s Pillow, and wrangled a job as company manager/assistant stage manager for Parsons Dance Company the fall after graduation. Running shows during Parsons’s US, South American, and European tours gave her a trial by fire, but Kristin found she liked and was good at the work.

Calling performances for Ailey—while intense and exacting—is only the “cherry on the top” of Kristin’s total responsibilities, which involve “organization, delegation, communication, and lots of paperwork and computer time,” she explains. Minutia—such as booking studio space or organizing the company’s rehearsal schedule—balance in her brain with big-picture concerns that include organizing future schedules up to a year in advance.

In the past decade, she’s also toured with Ailey in Asia, Europe, and America. Tours typically last five to ten weeks, so Kristin’s adapted to life on the road. But during her precious down-time she loves to relax in her NYC co-op apartment or be pampered at a spa on St. Lucia.

Audiences rarely think about the backstage work that makes onstage performances flow seamlessly, but they continue to respond to the Ailey company’s artistry, which Kristin calls “comfort food for the soul.”—E.H.W.