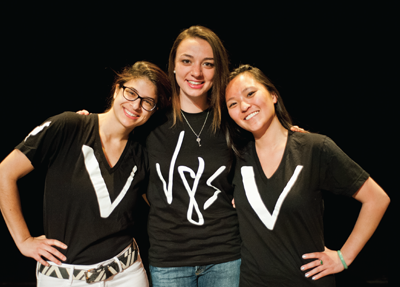 Founded in 1942 as the Victory Eights (named after the World War II phrase “V for Victory”). Began as accompaniment for a dance sequence at the 1942 Mount Holyoke Junior Show. The group often sang at nearby Westover Air Force Base when the war began and they were the first nonprofessionals to sing at the Stage Door Canteen in New York City.

Current songs: “Rolling in the Deep” by Adele, “Just for Now” by Imogen Heap, “Turn Me On” by Norah Jones, “Valerie” by Any Winehouse.

V8s Alumnae Memories
My favorite memory as a V8 is my first one—getting “sung in” as a new member. I was in my room waiting to hear whether or not I made it, when I heard the knock on my door. One of the V8s, my classmate Liz, entered the room and started to say how sorry she was—I thought I hadn’t made it, again!—and then I heard the rest of the V8s come around the corner singing “I Don’t Know Why” and I was officially a V8! That moment led to a really fun year and a lifetime of memories and wonderful friendships, all of which I still cherish today. Going back to campus for V8 reunions, it’s so clear to see that the close harmonies and close friendships are still going strong at every age. I am so honored to be a part of this incredible V8 tradition and so grateful for these women I call my friends and my sisters.—Caroline Carosso Griep ’86

The V8s were a huge part of my life at MHC and beyond. I was chatting with my friend, Ann Lyles MacPhail ’91 and we generated a laundry list of memories. It was hard to pick just one. I shared that not only did MHC prepare me to be a better leader, but the V8s specifically gave me leadership opportunities (decision making, business management, influencing) that became the fodder for all my interviews my senior year. I visited MHC in the spring of my senior year of high school for an overnight on the campus. This was the visit for students who were accepted in the College, but were considering Mount Holyoke as one of several options. By way of evening entertainment, the V8s performed on the stage of Abbey Hall for the prospective students and their hosts. I had been a singer all of my life and I was drawn in by the harmonies, the obvious friendships in the group and its history. The V8s were central in my decision to choose MHC over Smith! Fast forward through my life and I not only selected MHC, but I too become a V8. I returned to campus in 1993 to cochair the V8s’ fiftieth reunion with Ann Lyles MacPhail. Our all-alumna concert filled the recently renovated Blanchard Campus Center to standing room only. We had gathered over seventy alumnae from multiple decades to our stage. It was fascinating to see the similarities in talent and difference in styles through the decades with the one common bond of the tradition of a cappella at Mount Holyoke. Memorably, we were graced with six of the original V8s, who amazed us by remembering their parts after fifty years!—Tacy Byham ‘90

I was in V8s my senior year (1979-80) and while the entire experience was great, nothing beats that moment when you got called to the bell desk and a contingent of the group would charge into your dorm singing “Rugged But Right” to let you know you got in. No one forgets that experience, even decades later. It was also pretty cool to have the group sing an arrangement I did (“Saturday Night at Mount Holyoke College”).—Caroline Foty ’80 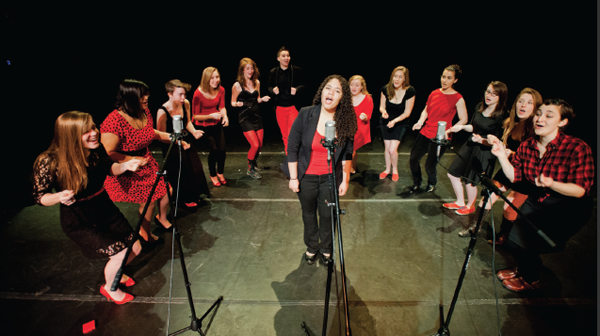 Founded in 1989, its original name, “Milk and Cookies,” was invented to attract audiences by implying that treats would be available at performances.

Original songs: “He Thinks He’ll Keep Her” by Mary Chapin Carpenter, “Helplessly Hoping” by Crosby, Stills, and Nash, “Any Man of Mine” by Shania Twain.

Current songs: “Love Lost” by The Temper Trap, “Can’t Take My Eyes Off of You” by Lauryn Hill, “The Chain” by Ingrid Michaelson, “Walking in Memphis” by Marc Cohn.

Founded in 1992 as a feminist a cappella group committed to singing “empowering songs that promote human rights.” The group holds a benefit concert at the end of each semester to raise funds for disaster relief efforts, domestic violence shelters, educational programs, and more. Each fall, Nice Shoes travels to Provincetown to sing in different parts of the city for the Provincetown Women’s Week in October.

Current songs: “Not Ready to Make Nice” by the Dixie Chicks, “Facedown” by Red Jumpsuit Apparatus, “Earth,” by Imogen Heap

Nice Shoes Alumna Memory
I was a Nice Shoe from 2001 to 2003. There are so many amazing memories to choose from. Along with rowing crew, being a Nice Shoe was one of the most defining and memorable experiences of my Mount Holyoke career. My favorite memory: being “sung in” as a new Shoe. I had auditioned in a call-back earlier that day. By the end of that experience, I was so impressed and star-struck by all of those amazing, talented women, that when they showed up at my door, singing, accepting me into their ranks, I felt like I had been cast in a Broadway show or something. It was incredible. And joining the group turned out to be every bit as wonderful as I hoped it would be.—Clarisse Hart ‘03 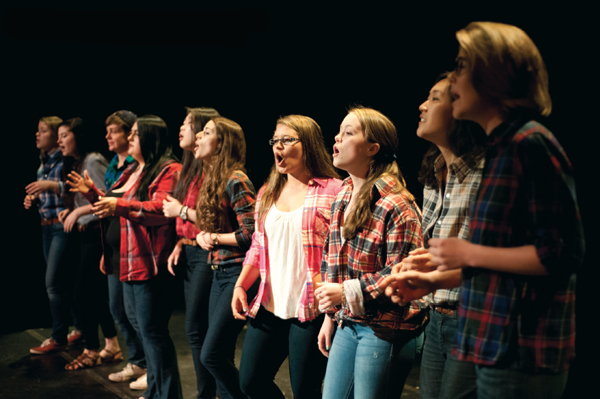 Founded in 2003, the group is known for wearing plaid in performance and for a repertoire ranging from The Cranberries to Lauryn Hill to Blink-182. Each summer, Diversions travels to Vermont to perform in retirement homes.

Original songs: “Free Fallin’” by Tom Petty and “Both Hands” by Ani DeFranco.

Recent songs: “If I Had a Boat” by James Vincent McMorrow, “Undertow” by Sara Bareilles, “Doo Wop” by Lauryn Hill. 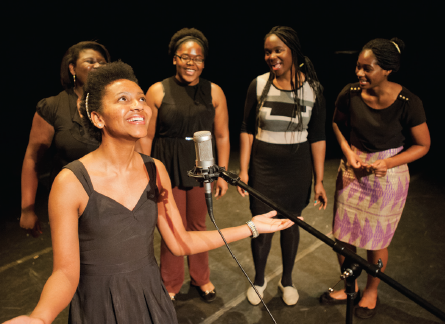 Founded in 2006 by Priscilla Yohuno ’09 as Mount Holyoke’s only faith-based a cappella group. The group comprises members from a variety of Christian traditions and is known for its international musical repertoire.

Founded in 1956; named for their class color. Performed 1956–60, wearing blue blazers, at local venues including the Yankee Pedlar, Glessie’s, and Wiggins Tavern. Founding members include Sandy Pritz, Linda Sturtevant, and Mary Ann Sparklin, among others from the class of 1960.

Songs: “Basin Street Blues” by Spencer Williams, “My Funny Valentine” by Rogers and Hart, “Lullaby of Broadway” by Harry Warren.

Blue Notes Alumnae Memories
I remember the night we became strike breakers or “scabs.” Periodically we went to the Yankee Pedlar, a popular restaurant in Holyoke, to sing for our supper. One cold and wet winter night, as we arrived, we were confronted by a picket line of restaurant workers. Holyoke was a rough place in those days, and did not countenance college girls well. We crossed the picket line, being jeered and booed by the strikers. We had an agreement to sing and we were hungry! When I returned home for spring break, my father, a New York lawyer, took me through all the ethical and moral arguments concerning what we had done, and roundly deplored my newly acquired use of the word, scab. I don’t know if the Poli Sci department ever got wind of our adventure.
The two girls with the deepest, lowest voices were also the shortest in the group. They regularly garnered great laughs when they stepped out and let go: five feet of baritone issuing from two adorable girls in MHC ’60 blazers! They always brought the house down. Last but not least, we always sang love songs with our eyes closed…Some of us still do.—Linda Sturtevant ‘60

The Blue Notes were formed in the fall of 1956 with members of the class of 1960. We did not sing with the V8s, who were also active on campus at the time, and we did not feel any sense of competition with them. We practiced at least weekly, and we had some very talented arrangers in the group, as well as singers, so we had plenty of fun fodder—songs such as “Basin Street Blues,” “My Funny Valentine,” “Lullaby of Broadway,” “Worried Man,” and “Sentimental Journey.” We sang at class functions, but we also sang for our supper at restaurants around the valley, such as Yankee Pedlar. The suppers were probably in the last couple of years we were at school, because we needed transportation, and my boyfriend (now husband) was in grad school at UMass then and had a car, so he drove at least some of us. We had a wonderful time, and we became fast friends. We even did a reprise at our fiftieth reunion, those of us who were able to be there. (We cut a record before we graduated, and we reviewed that just a little.)—Sandy Pritz 60

The Blue Notes were among the highlights of my time at Mount Holyoke, and it is always fun to be back together at reunions. Besides singing for our supper, I can remember singing at a party at Wesleyan (I think it was Eleanor Donahoe’s boyfriend who arranged that caper). We had so many laughs together. Early on we were practicing in the chapel near the organ and Miss Douglas, director of the choir, burst in and told us to leave immediately. “Basin Street Blues” was not chapel-appropriate! I have some photos of the Blue Notes in our blazers, either at Glessie’s or at Wiggins Tavern in Northampton.—Mary Ann Sparklin Woodruff ’60

A Sampling of Other Colleges’ A Cappella Groups

A cappella groups have been established at American colleges since the late 1800s. The Rensselyrics of Rensselaer Polytechnic Institute is the oldest known group, forming in 1873 as the RPI Glee Club.

Partly in response to a resurgence of interest in a cappella singing in popular culture (the recent film “Pitch Perfect,” the television series “Glee”), college a cappella groups are flourishing across the country—Northwestern University has at least 15—and are frequently celebrated for witty renditions of classics and current hits.

The Whiffenpoofs
Yale’s Whiffenpoofs is the longest continuously performing college a cappella group. Cole Porter was a member in 1913.

The Smiffenpoofs
The Smiffenpoofs formed in 1936 at Smith College after some Smith students were inspired by a Whiffenpoofs performance; they chose a similar name in honor of Yale’s group. (Although Smith’s group was founded before the V8s, MHC’s group is the oldest continuing all female collegiate a cappella group in the country.)

The Beelzebubs
Tufts University’s oldest a cappella group is The Beelzebubs, an all-male group that formed in 1962.

The Amalgamates
The Amalgamates is the oldest co-ed a cappella group at Tufts University; they’ve released 11 albums since their formation in 1984.

Straight No Chaser
Straight No Chaser formed as a student a cappella group at Indiana University in 1996. After a recording of one of their 1998 performances went viral in 2006, the original members landed a record deal.

Out of the Blue
Out of the Blue is an all-male a cappella group at the University of Oxford, although membership is not limited to Oxford students.

Rhythm and Jews
Rhythm and Jews is the University of Chicago’s Jewish a cappella group. One of their most popular songs is “Schneinu B’Yachad,” a variation of The Turtles’ “So Happy Together.”

One response to “Listen Closely: More About MHC’sA Cappella Groups”