Looking Back on the Laurel Chain 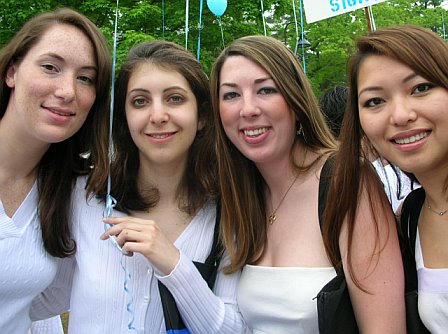 The moment I picked up my portion of the laurel chain on my graduation day in 2004, I felt a weight on my shoulders that has stayed with me ever since. It has been almost ten years since that alumnae parade, but I will never forget the feeling that came with carrying that massive length of roping. Joined to each of my classmates, we walked the same route to the academic buildings we had taken for four years. Only this time, we no longer had the lightness in our step that comes with the complete freedom of an undergraduate. This would be our last trip as a class and our final day as Mount Holyoke students.

We carried a massive rope of laurel together and it did not break as we walked the familiar path across campus for the last time.

Even after we wrapped the chain around Mary Lyon’s grave, that sense of push and pull stayed with me as I settled into my life after college. Some days I felt I was losing my connection to everything that felt familiar, while others I wished for more distance to set my own path. Looking around at the older alumnae celebrating the reunion, I remembered seeing their smiles and imagined they had all fulfilled their wildest dreams. Had they stood close to the group or stepped away when they felt torn in two directions? I may never know which way they headed, but I have found my own balance since graduating.

On the eve of my ten-year reunion, I am proud to say that I have found my own path but I still stay connected to my classmates. In our Mount Holyoke classes, dining halls, and dorms, we became friends and eventually family. Over time, when one gets to studying during their senior exams and the fear of the future descends upon you, your friends at Mount Holyoke can become your world.

After graduation that world did not change, it just expanded. I am no longer afraid of the future because I am living it. In the nine years since we left, our class has become the older alumnae and, yes, we have fulfilled our wildest dreams! We have families, careers, houses, graduate degrees, and, most importantly, made a difference. The journey has not been easy, but the connections we formed on the grounds of Mount Holyoke have remained to this day. Along the way, we have certainly stumbled. But we lifted each other up just as we did when carrying our laurel.

On parade day nine years ago, we carried a massive rope of laurel together and it did not break as we walked the familiar path across campus for the last time. We managed to keep from staining our white outfits too badly, despite the greenery and unfortunate rain that day. It may have been hard, but we quickly learned that the greatest achievements never are easy. You have to push and pull just enough to get the job done. Anyone who has carried the laurel chain can tell you that.