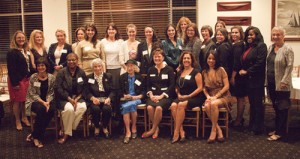 President Lynn Pasquerella ’80 visited Miami on January 7, where she met with a group of alumnae including Mount Holyoke’s oldest alumna. Anita Schuck (seated to President Pasquerella’s immediate right) is 108 years old and a member of the class of 1924.

It is such a pleasure each month to consider what I have learned about Mount Holyoke that I can share with all of you. I am as much a student of the college as president as I was when I was here in my undergraduate years, and I am privileged to count our community of alumnae as one of my most valuable teachers. Most recently, I encountered this community at the launch of the Women in Public Service Project in Washington, D.C., and in visits coinciding with the opportunities I have had to speak about our mission of liberal learning for purposeful engagement in the world. Your presence at events, and the stories you share with me, affirm my sense of the college’s importance in the past, present, and future.

In spring 2011, we joined with the State Department and the remaining Sisters institutions in founding the Women in Public Service Project. We agreed to share our resources for a common mission: inspiring and equipping women to address the world’s greatest challenges through public service. Following months of preparation, the project’s formal launch in December 2011 was a highlight of my presidency. In addressing the crowd gathered in person and online, speaker after speaker challenged our aspiring students and accomplished alumnae to tap the accumulated wisdom of women leaders from around the world. Our speakers’ achievement as global leaders is to be celebrated, and their persistence in the presence of significant obstacles is to be emulated. Chiedza Mufunde ’12 and Congresswoman Nita Lowey ’59 participated in a panel discussion, and it was clear to me that Mount Holyoke women have been and will be a vital presence in public service in the United States and in the global community. In addition to the Mount Holyoke alumnae who participated in the colloquium, many of you watched the event via webcast, and some of you recently joined an on-line chat about “next steps.” I hope all of you will visit the Project website regularly and consider how this initiative might influence your own choices about future leadership.

I believe Mount Holyoke women are equipped to serve, in part, because you have the confidence to risk competition—a characteristic mentioned by Secretary Clinton and several other speakers at the colloquium. Equally important is the quality and nature of the education you have received. I am a proponent of the liberal arts because I believe it is critical that people learn how to think rather than what to think. The demands of public service require agile, perceptive minds and compassionate hearts. As with so many fields, those who serve in public leadership cannot always predict the context or circumstances in which their skills will be tested and put to use. I’m confident that an education emphasizing breadth and depth, knowledge and practice is the most effective at preparing leaders, and this is the education Mount Holyoke has offered since our founding 175 years ago.

It has been gratifying this fall to serve as a spokesperson for the value of liberal learning at locations up and down the East Coast of the United States. I was invited to deliver the opening talk at the American Conference of Academic Deans and the Phi Beta Kappa Society, and titled the talk “The Ketchup’s in the Bag and the Check is in the Mail.” (You can watch this talk from the President’s Office webpage.)

I still receive messages each day from listeners and readers who similarly believe there are methods of practice that can make our academic disciplines accessible to the general public; there is a desire to champion the liberal arts in new ways. Together, we are the voices promoting the relevance and meaning of this education, building bridges between the academy and the world. As alumnae, you are particularly gifted in delivering this message, as you have known the value of the liberal arts from within the classroom and from the many fields you have chosen to pursue. Thank you for reminding me time and time again of your love for Mount Holyoke. This is, in part, a love for the liberal arts.

I began the calendar year at the Council of Independent Colleges and had the delight of meeting with the informal Miami Club. The event, attended by more than sixty alumnae, included alumnae spanning ten decades. Anita Schuck, class of 1924, was in attendance. She is our oldest alumna at the age of 108, and it was a great honor for me to meet her. Anita talked about studying English at Mount Holyoke when the campus was lit with gas lanterns. While our campus has certainly changed since Anita and her classmates were here in 1924, our mission has values that are eternal. Liberal learning will continue to serve as a light on the paths of our students’ and alumnae’s lives.