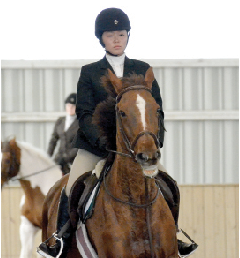 Having never ridden competitively, So Jin Lee ’13 joined the riding team her sophomore year. Despite being a true beginner, she quickly moved up the ranks to become one of the team’s most valued members. “So Jin realized that she could be an asset even at a lower level of the sport,” says coach CJ Law, “and she grabbed that opportunity.” Law enthusiastically speaks about what a pleasure Lee was to teach: “Whatever mood we were in at the beginning of a lesson, we were always on the plus side of that by the end. She just lights up a room.”

In May, the Alumnae Association honored Lee for her contributions as an athlete and student by presenting her with the Laurie Priest Alumnae Scholar Athlete Award. The annual honor, formerly known as the Alumnae Association Scholar Athlete Award, was renamed to honor the retiring athletics director. This award is conferred when a student demonstrates qualities that make her an outstanding athlete, an exceptional scholar, and a leader within the community.

A true embodiment of this award, Lee maintained top grades while serving as the president of the SGA since 2011. She was also chosen to travel to Washington, DC, for the launch of the Women in Public Service Project with then-Secretary of State Hillary Clinton. She was selected as one of five students representing MHC at the 2012 Women in the World summit in New York City, and also received the College’s Student Leadership and Service Award. Lee plans to attend the School of Foreign Service at Georgetown University this fall to earn her master’s degree in Asian studies with a focus in political security.