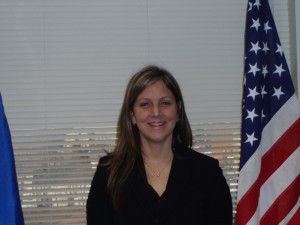 Appointed by Governor M. Jodi Rell, Michelle is the watchdog for victims’ rights. She acts as a mediator between crime victims and the various agencies that touch their lives including law enforcement, the courts, the state attorney’s office, and social-service agencies. Looking ahead, Cruz says she will meet with the head of judicial marshals to review and devise a safety plan for each local court house, and advocate for protective orders for victims of sexual assault who are unrelated to their assailants.

Michelle graduated from University of Connecticut School of Law and now practices in Hartford. Originally from California, Cruz was inspired by the groundbreaking work in domestic violence of a prosecutor, Sarah Buel, in the Massachusetts District Attorney’s Office. She moved east to work in the DA’s office in western Massachusetts as a prosecutor specializing in domestic violence, sexual assault, and child abuse.

Cruz attributes her success to her time at Mount Holyoke, where every woman around her was “involved in changing the world,” and more specifically, to head crew coach Jeanne Friedman and the time she spent on the water. “Jeanne taught us to be sensitive to the people around us … to make us aware that every ripple we make has the potential to affect someone’s life. She took every opportunity to enlighten us about the struggles of other people.”

Speaking of her present goals, Cruz’s calm, assiduous nature—which carried her across the country to MHC and across many finish lines—emerges. “I want to be successful in this position, to help people, and to foster good relationships.”

This article appeared in the spring 2008 issue of the Alumnae Quarterly.