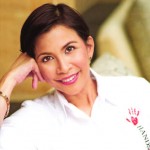 Typhoon Ketsana, known in the Philippines as Ondoy, hit the Pacific island nation on September 26, 2009, dumping almost twice as much rain as Katrina did in Louisiana, killing hundreds, and leaving metro Manila in ruins.

An island city, Manila is continually plagued by typhoons and tsunamis. But this particular natural disaster was different. Thanks to established volunteer organizations, the people of Manila were able to mobilize quickly and lift their city out of the muddy waters.

Gianna Montinola ’80 had her hand in the development of this volunteer culture as the cofounder of Hands on Manila, the first international affiliate of the Hands On Network, a nonprofit group that organizes region-specific volunteer activity. Founded in 2000, she now serves as the board director of the Manila group.

“Years ago, responses to a disaster were determined by geography and affinity. Now, our people are responding as a nation,” says Gianna, a native of the Philippines. With an organized “corps” of more than 6,000 regular volunteers, Hands on Manila is always on call.

The organization’s model of volunteerism stresses flexibility. “It’s always a challenge for those who are working, who have families, and who have other social obligations to find the time to do volunteer work,” says Gianna. Hands on Manila caters to young professionals by working with their schedules to find a time that fits and an activity that interests them.

The opportunities are endless and range from arts and crafts to building homes. Volunteers can spend the afternoon playing basketball with teens at a shelter or teach computer literacy to children.

In the aftermath of Katrina, Hands on Manila referred all volunteers to disaster-relief operations, for whom people packed provisions and delivered them around the city. The group also hosted a “servathon” with corporate volunteers that helped to reconstruct badly damaged public schools. “The private sector and nonprofit volunteer organizations pretty much dominated relief operations,” said Gianna.

“In a country like the Philippines that is in dire need of basic services, almost any type of help is welcome,” says Gianna, who for ten years has celebrated her birthday with the girls at a local shelter she visits regularly to teach a class on cost-effective cooking.