Mount Holyoke Alumna Establishes Networks for the Empowerment of Girls 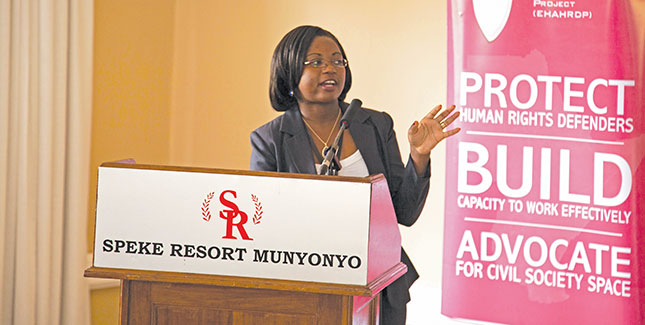 Memory Bandera ’04 grew up in Zimbabwe and learned about Mount Holyoke from an admissions counselor with whom she was invited to meet. Bandera already had co-founded the Girl Child Network (GCN) of Zimbabwe, a nonprofit that promotes empowerment and education for girls. After earning a master’s degree in international relations at Suffolk University, she moved to Uganda to work for Youth Action International, a nonprofit that rebuilds war-torn communities in Africa. Today, Bandera is the director of programs at DefendDefenders, a nonprofit that provides emergency protection to human rights defenders in the East and Horn of Africa.

On the need for the Girl Child Network:

There were no girls in positions of leader-ship at my high school, and girls were not speaking up in class. Some of us started meeting after school, discussing injustices in the classroom. People started sharing experiences from their homes: sisters who weren’t able to continue with school because they were expected to stay home and do chores, experiences around abuse and sexual violence. The organization was made official just after I finished high school. We got our first grant from the US Embassy, enabling us to secure office equipment. Then we received a grant from the Global Fund for Women that provided funds for office rent and incubating activities. I left to go to Mount Holyoke, but the organization continued. GCN was the first organization to have village empowerment centers outside of the city.

We were working on programs to reintegrate former child soldiers. We needed something to address their needs. Memory Bandera ’04

On helping women in post-war Uganda:

When I came to Uganda I was working with Youth Action International, and we were focusing on conflict areas. I was working in the northern parts of Uganda, which were affected by the Lord’s Resistance Army for more than twenty years. They were abducting children, mostly, to take them into the bush and train them. And they were taking young girls, mostly teenagers, to be given to army commanders as wives. We were working on programs to reintegrate the former child soldiers. There was a whole category of people returning—girls who had children. That’s when I founded Girl Child Network Uganda. The entry point for those teen mothers was economic empowerment. Now there are programs for at-risk girls that focus on sexual violence prevention and response; a women’s role models program; and mentorship programs for young girls in the country.

On her job at DefendDefenders:

One thing I valued most [at Mount Holyoke] was Complex Organizations, taught by Professor Frederick McGinness. That really gave me different perspectives on managing companies. And because of my experience with GCN, which started in an informal way, I started thinking more about leadership in the nonprofit sector. At that point, I didn’t know that I’d end up doing this kind of work. All I knew was that I wanted to come back to the region and give back.

On the power of networks:

When I finished high school, I was selected for the United States Student Achievers Program (USAP), at the time run by the US Embassy. Students who were part of that program ended up at different colleges in the US. Alumni of the USAP program and MHC are two strong networks. And my current job has been a great platform for my career growth, as I work in a network organization with membership in eleven different countries within the East and Horn of Africa.

This article appeared as “Establishing Networks for Girls” in the spring 2018 issue of the Alumnae Quarterly.