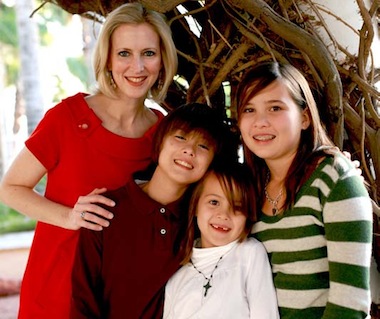 On the day Kristin Davis ’88 came home from the hospital with her beautiful baby daughter Ripley, her world began disintegrating. She was hit with intense nausea, vomiting, diarrhea, dehydration, and fainting. Breastfeeding her baby was out of the question. Simply lifting her head off the pillow was a seemingly impossible task. As the days of overwhelming sickness melted into weeks and then months, Davis was in deep despair. In addition to caring for her newborn, she had a thirteen-month-old son with special needs.

After three months of gastrointestinal tests and a couple of week-long hospital stays, Davis had transformed from a very healthy, vibrant, and physically active thirty-year-old to a ghost of a woman unable to perform even the simplest everyday tasks.

“Brushing my teeth was a major accomplishment. I was devastated,” Davis recalls. “Nothing in those ‘what to expect’ pregnancy books prepared me for the nightmare I found myself in. I was a failure of a mom, a pathetic wife, and couldn’t even get out of bed to care for my babies. I wanted to die.”

During her last hospital stay, a nurse gently suggested that Davis might have postpartum depression (PPD) and recommended a book for her to read. She was stunned. “As I opened the book (Postpartum Survival Guide, by Ann Dunnewold and Diane G. Sanford), I saw my life in its pages. Learning about what was wrong with me ended up saving my life.”

Davis had a disorder that, although the number-one complication of pregnancy, is still little known. According to Hilda Templeton, a psychiatrist who specializes in postpartum mood disorders, only about one-third of those suffering from PPD are diagnosed and only 22 percent are adequately treated. 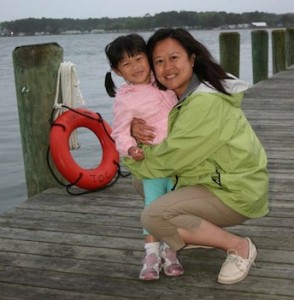 Like Davis, Ivy Shih Leung ’86 was caught off-guard by PPD. After years of trying to conceive a baby, Shih Leung gave birth in 2004 to a healthy baby girl, following a successful in vitro fertilization cycle.

“I returned home from the hospital fully expecting to resume my old routine in addition to taking care of Sydney,” she recalls. Shih Leung ignored her mother’s and her mother-in-law’s advice to rest as much as possible. She was doing well until her sixth week postpartum, when she suddenly could not sleep despite mind-numbing exhaustion. Shih Leung’s ob/gyn merely prescribed Ambien, completely overlooking the fact that insomnia at six weeks is a clear sign of postpartum depression.

A couple of weeks later, Shih Leung developed full-blown panic attacks that scared her into thinking that she might never return to her old self again, and might not even make it through alive. “I was completely blindsided by this experience, never once thinking that I would be one of ‘those mothers’ who would ‘let’ themselves get depressed after childbirth, especially after what my husband and I went through to have a baby,” says Shih Leung.

Angered by the unnecessary suffering she went through, Shih Leung decided to help spread awareness by writing a book about her PPD experience. “There is no reason for any woman to feel as alone and as scared as I felt while sick with PPD,” she says. In the early stages of working on her book, Shih Leung reached out to Marg Stark ’85, author of What No One Tells the Mom. 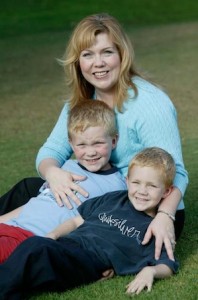 Stark also suffered from PPD, and devoted a chapter of her book to the topic. Though Stark was aware of the natural hormonal crashes that occur with childbirth, her hormones never righted themselves. She went from being an overexuberant person to one who was prone to crying at the drop of a hat, at a song on the radio, or the mere mention of something sad.

Stark also had feelings of guilt and inadequacy because she was not enthralled with her babies from the first moment she laid eyes on them and could not enjoy motherhood during the first few months after childbirth.

“The experts I read extolled the critical importance of bonding. Well, I just felt like a failure at something everyone else seemed to come upon naturally,” says Stark. “Those first months, I thought I wasn’t cut out to be a mom. I was so sleep deprived that I couldn’t wait for my boys to nap, and when they didn’t go down for naps, I would be filled with rage … which brought about untold amounts of guilt and shame.”

It’s only recently, twelve years after becoming a mom, that Stark has been able to wean herself off antidepressants with a combination of high-dose omega-3 fatty acids, exercise, and supplements. “I am now one of the best mothers I know,” says Stark. “I adore Patrick and Liam and I cherish their booboos, their snuggles, and all of the teaching moments. But I don’t shy away from telling women how hard motherhood really is, and how prevalent PPD really is.”

Davis, Shih Leung, and Stark aren’t alone by any means. According to MedEdPPD.org, postpartum depression strikes approximately one in eight new mothers within a year after giving birth. Some women suffer in silence, hesitant to admit how they feel out of shame or guilt over not living up to their own expectations. But PPD can be both prevented in many cases and treated effectively when it does occur.

Awareness of postpartum depression—knowing what it is, its symptoms, whether one is at high risk, and how to prevent or treat it—is critical to every woman who plans to have a baby. Awareness begins with knowing the fundamental difference between “baby blues”—a passing episode of mood instability that occurs within the first couple of weeks postpartum and disappears on its own—and PPD—an illness that usually strikes within the first year postpartum. Many PPD symptoms—being tired and anxious, for example—are experienced by most new mothers, so moms often think PPD symptoms are just part of the normal postpartum process. But other symptoms (see sidebar) may signal deeper problems.

Many studies have shown that hormonal changes are responsible for PPD by causing an imbalance in brain chemicals called neurotransmitters. Serotonin is one such neurotransmitter, and medications such as selective serotonin reuptake inhibitors (SSRIs), which increase serotonin availability in the brain, are usually effective in treating PPD.

However, different treatments work for different people. Medication by itself is sufficient for some, while therapy alone is enough for others. Some find that medication and therapy are required to recover. A woman suffering from PPD should be informed enough about the pros and cons of treatment options to decide what is right for her.

For example, one common side effect of some antidepressants is a loss of libido. However, many women experience this simply due to normal hormonal fluctuations and the physical trauma of childbirth. When deciding on any treatment plan, it is particularly important to keep communication lines open with a medical practitioner and family members.

With all perinatal (prenatal and postpartum) mood disorders, the longer a woman waits to seek help, the harder it is to recover. Prolonged and untreated depression may prevent a new mother from bonding with her baby and enjoying motherhood. It can also negatively affect her baby’s cognitive and social development, and harm the mother’s relationship with her partner. Worse yet, untreated postpartum depression can lead to such feelings of hopelessness that ending her life may seem like the only way for a new mom to escape the pain.

But there is hope. In 2006, US Senator Robert Menendez (D-NJ) sponsored the Melanie Blocker-Stokes MOTHERS Act. Although initially killed, the bill (http://www.govtrack.us/congress/billtext.xpd?bill=s110-1375) has come back for a second round in the Senate. This potentially lifesaving legislation was initially inspired by PPD survivor and former New Jersey First Lady Mary Jo Codey and named after Blocker-Stokes, a new mother who threw herself from a high-rise hotel in Chicago while suffering from postpartum psychosis in 2001. The legislation is aimed at seriously boosting public awareness, awarding grants for treatment and supportive services, and increasing research and educational efforts. The ultimate goal is to eradicate PPD by ensuring that every new mother across the country has information before childbirth and access to PPD screening and resources afterwards. One important result of this pending legislation is that people are starting to talk openly about postpartum depression and reach out to new moms.

Word is spreading about ways to prevent PPD before it occurs, such as ensuring social and practical support for moms in the first weeks after childbirth. In the United States, postpartum doulas have become increasingly popular. Doulas can ease the transition to motherhood by educating new moms about what to expect, and by helping them get the rest they need to recover from childbirth, providing support with childcare, housework, and breastfeeding. A doula’s presence can provide a new mother both an extra set of experienced hands for baby care and the comfort of knowing she is not alone.

Psychological adjustment is also key. Realizing that most MHC women are high achievers who will expect to excel at being mothers too, Shih Leung cautions, “Drop any pride you may have or lofty goals of self-sufficiency. With motherhood, you learn as you go and with help from those around you. Mistakes will be made, and it isn’t possible to have control of your life when you have an infant to take care of. Having a baby for the first time involves a complete change in lifestyle very different from the independent lifestyle and mental stimulation you are used to. Your daily routines will no longer be predictable, but instead will revolve around your baby’s feeding, sleeping, and diaper-changing schedules. Avoid setting high and specific expectations of how your childbirth and motherhood experiences will be, as you would only be setting yourself up for disappointment when your expectations are not met.”

Stark adds, “MHC women, typically go-getters in career and family, may be particularly susceptible to PPD because we believe we can do it all, even without ‘the village’ that the rest of the world knows it takes to raise a child and care for a mother. Part of my adjustment was learning I couldn’t just throw my boomchkin in a backpack and carry on with my busy life. Babies often have a way of making superwomen say ‘uncle.’ My training at Mount Holyoke was to never say uncle!”

Once their postpartum depression experiences were behind them, Shih Leung and Davis were fully able to enjoy their babies, participating with joy in their early development. Now both are reaching out to other women, raising awareness and spreading the importance of advocacy. They share their PPD experiences and provide helpful resources and information through blogs that were recently designated as two of the Nurse Practitioner School’s top fifty postpartum support blogs. (Visit http://ivysppdblog.wordpress.com and http://ppdsurvivor.blogspot.com.)

Although she suffered severe PPD after the birth of her third baby, Davis had a picture-perfect postpartum experience with her fourth. “I took several simple steps, such as hiring a postpartum doula to monitor potential symptoms and to handle my baby’s nighttime feedings until I recovered from my C-section. Immediately after my baby girl was born, I started on an antidepressant and had a psychologist lined up in case I became ill. I also had a part-time sitter helping after school with my older kids,” Davis says.

For Davis, like many MHC women, asking for help and relying on the support of others was unknown territory. “It truly does take a village,” she says. “That’s the greatest lesson that PPD taught me. And being proactive makes all the difference in the world. You can minimize your chances of getting PPD and be the kind of glowing new mom that you read about in the pregnancy books.”

This article appeared in the winter 2010 issue of the Alumnae Quarterly.