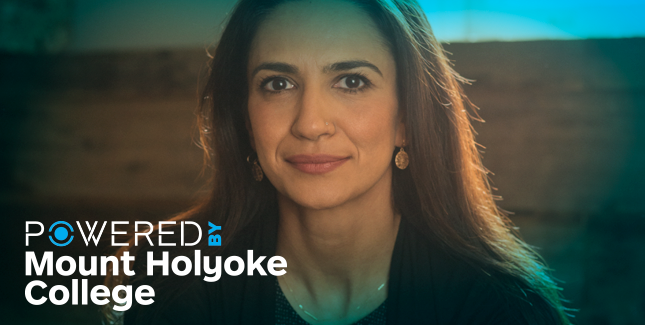 Deeply committed to furthering social justice and international perspectives through education as dean of the School of Education at the University of San Francisco (USF), Shabnam Koirala-Azad ’99 traces these passions across the globe to where her sense of identity and community were formed.

Koirala-Azad was raised in Kathmandu by her Nepali father and Iranian mother during a time when bicultural marriages were rare. Their household also included her maternal grandmother and great-grandmother, who had both fled religious persecution as members of the Baha’i faith.

“It was a very unusual family situation,” Koirala-Azad recalls, “because on the one hand, I was immersed in the Nepali context, going to school with all Nepali kids, and at the same time, I had four generations living under the same roof with an entirely different experience, the Iranian experience. That was a big part of my childhood, figuring out all these differences.”

Nepal was—and still is—one of the poorest countries in the world, with high rates of illiteracy and limited access to education, especially for girls and women. Gender norms ran deep, and a patriarchal structure was pervasive. But Koirala-Azad was motivated by her mother—who started one of the first progressive schools in Nepal—and grandmothers, all teachers working to advance the Baha’i notion of unity within their classrooms and to respond to the oppressive forces of the time.

Wanting to further explore the issues of education and accessibility, Koirala-Azad entered Mount Holyoke as a double-major in psychology and education. “I was so inspired by the legacy of Mary Lyon and of women being at the forefront of an education geared toward the empowerment of women,” she says. “The son of the founder of the Baha’i faith…emphasized the importance of the advancement of women. It all aligned with my values and my intellectual curiosity.”

After Koirala-Azad received a master’s degree in social and cultural studies in education at the University of California, Berkeley, she went on to pursue a doctorate. “My dissertation was about understanding the educational opportunities in Nepal and the reasons why Nepali students leave to pursue study elsewhere,” she says.

In 2005 she taught her first classes at USF, where she ultimately accepted a tenure track position in their international and multicultural education department, later becoming chair. During that time, a colleague proposed a small concentration in human rights education, which Koirala-Azad embraced. “We designed a series of courses and quickly realized we were the first graduate school of education to offer anything like it,” she says. “It started gaining attention from other universities. As we learned more and saw a great demand, we started a master’s degree program in human rights education, the first degree program of its kind in the US.”

“So much of what our students are producing is around making people aware of the depths of the issues, the inequities, but also rising above that to find spaces and opportunities and pedagogies for hope and healing and unity.”

Now as the the first Nepali woman to become dean at a university in the United States, Koirala-Azad says, she has been given opportunities to engage in institutional change, including in the ways people “think about principles of consistency and equity.”