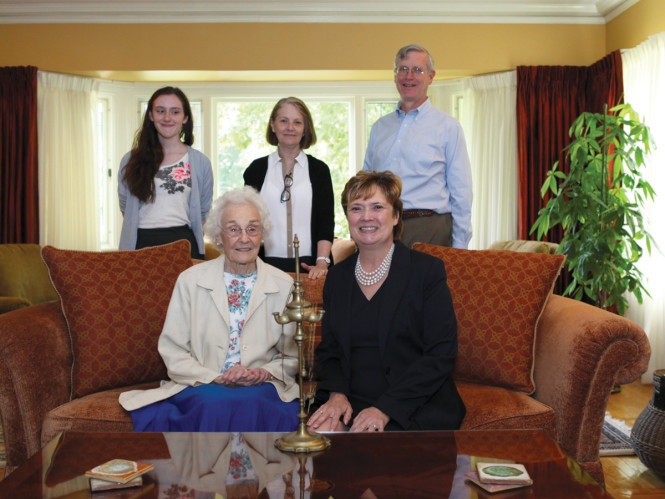 The Bell family presented President Pasquerella with Mary Webster’s oil lamp during a visit to the President’s House in July.

At first the letter seemed ordinary enough, but when I read the opening line—I was hooked.

“Quite out of the blue, I’m writing to let you know that your mention of Mary Stewart Webster, class of 1855, in last September’s (2013) convocation address had an impact far beyond what you might imagine.

My mother, Rosamund Purdy Bell, is the President of the class of 1942, and the story of the diary of her great-grandmother, Mary Stewart Webster, is one that weaves three different centuries in the history of Mount Holyoke.”

The letter came from Charlie Bell and detailed an intriguing story of burned diaries, whale oil lamps, and his fifteen-year-old daughter, who brought everything together.

In my convocation address last year, I quoted lines from a diary detailing life in the Seminary. Mary Webster wrote about ignoring bells to retire and reading into the night. Luckily for Mary, a teacher decided Mary’s lamp could remain lit “for something very necessary.” I used the quotation to talk with students about our mutual passion for learning.

Being linked to all those Mount Holyoke women had a profound effect.
Lynn Pasquerella ’80

In 1938 when Rosamund Bell began Mount Holyoke, an aunt—also an alumna—gave her Mary Webster’s leather-bound diary. Rosamund was thrilled to receive her great-grandmother’s diary and showed it to a family friend—a recently retired MHC professor.

When Rosamund’s aunt heard her niece had shared the diary, she became inexplicably incensed and demanded the diary back. Rosamund complied, and her aunt burned the
treasured volume.

Fast-forward to 1988, when Rosamund received a letter from the College archives stating a copy of Mary Webster’s diary had surfaced. Apparently the professor, realizing the historical importance of the text, had made a duplicate and had given the archives a copy. Initially researchers’ use of Webster’s diary was restricted, but some fifty years later, those limitations were lifted.

Enter Rosamund’s fifteen-year-old granddaughter, Amelia, who is intrigued by stories of the women in her family. Recently, Amelia plugged her grandmother’s name into a search engine. One click led to another and then another, and up popped my convocation address quoting Mary Webster’s diary.

Amelia and Rosamund said being linked to all those Mount Holyoke women had a profound effect on them. They felt the lived significance of the College throughout the centuries.

To show the family’s appreciation to Mount Holyoke, they presented me with a whale oil lamp that belonged to Mary Webster. We don’t know if it’s the lamp that she turned up to read late into the night, but we like to think so.

That July afternoon when Charlie, Rosamund, and young Amelia joined me for lunch is one I’ll long remember.

The lamp now is sitting prominently on a coffee table in the President’s House. I’m already enjoying telling visitors the long history it represents.

I’m hoping we’ll soon have another generation of that wonderful family to keep the lights burning.