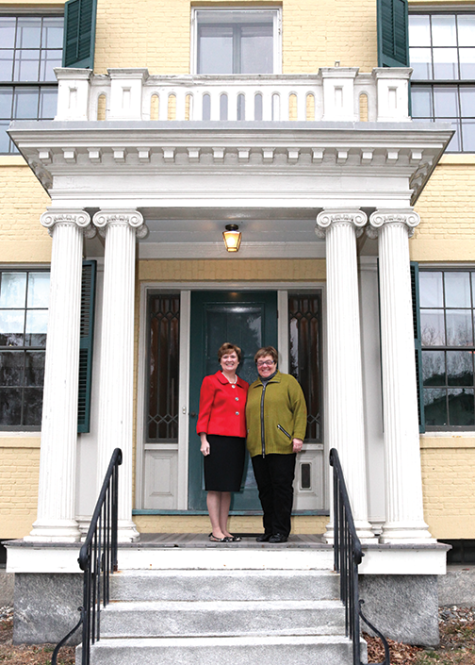 I have a confession to make.

Until a few months ago, I had never been to the Emily Dickinson Museum. I know, I know, it’s indefensible. My wobbly excuse is that I’m a little like Parisians who’ve never taken in the Eiffel Tower or New Yorkers who haven’t visited the Statue of Liberty: the old “It’s so close; I’ll get there one day” alibi.

But, this winter I finally made it, and I couldn’t have enjoyed my visit more.

Jane Wald, executive director of the Emily Dickinson Museum, gave me a tour of The Homestead—the poet’s home for most of her life. Interestingly, Dickinson did not live in this Amherst home in 1847 when she left for Mount Holyoke. The house of Dickinson’s youth no longer exists. (It was located on North Pleasant Street where the Mobil Station next to Zanna now stands.) But the home that fueled Dickinson’s imagination and where she famously penned her “letter to the world,” that home was—in a word—phenomenal.

The poet’s upstairs bedroom is being restored to the way it looked during Dickinson’s lifetime. When Jane led me in, the room was down to the studs; restorers had removed plaster, the ceiling, and floorboards to find out as much as they could about the original condition of the space. They discovered fascinating clues through scraps of wallpaper and barely discernible marks on the floor indicating where furniture was placed. Ironically, the bare-bones experience of the room made me feel even more intimately connected to Emily Dickinson. Perhaps it was the shadows cast by winter light that made me keenly aware of the passage of time and how much we all are connected to those who precede us and those who will follow.

Students pore over Dickinson’s manuscripts, ponder the influence of Mary Lyon, and survey the world from Dickinson’s cupola.
Lynn Pasquerella ’80

For more than a decade, Mount Holyoke College students have been lucky to study Emily Dickinson within these very rooms. Martha Ackmann’s popular Emily Dickinson in Her Times course meets every Tuesday afternoon across the hall from the poet’s bedroom. There students pore over Dickinson’s manuscripts, ponder the influence of Mary Lyon, and—on the last day of class—wind their way to the top of The Homestead, where they survey the world from Dickinson’s cupola.

Students say it’s impossible not to imagine the poet standing in that same spot. They also say that looking over the gentle hills of western Massachusetts is a moment they will remember for the rest of their lives.

During Reunion II this year, Martha Ackmann and Marty Rhodes Figley FP’03 will be leading a Back to Class session. Marty, the author of seventeen historically based books for young readers, was once a student in the Dickinson seminar. Inspired by the poet’s words and love of dogs, Marty wrote Emily and Carlo, a tender story about Dickinson and her protective Newfoundland. Martha and Marty will talk about how Emily Dickinson has influenced their lives and work.

If you’re not due for Reunion this year, come to campus as soon as you can. We’re always eager to see you.

And up the road in Amherst? Emily Dickinson’s door is open as well.