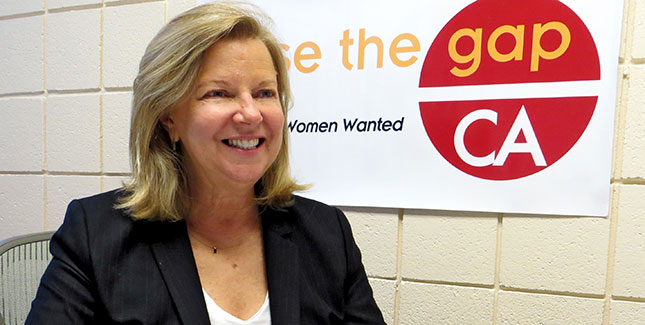 Mary Hughes ’74 sits in front of a banner for her organization, Close the Gap CA. Photo courtesy of Hughes

There are many ways to make a change in political leadership beyond running for office (and voting, of course), including running political campaigns, fundraising and generally promoting women candidates. These four alumnae are committed to doing all they can to help more women get elected.

In 2013 Hughes noticed that the number of women in the California legislature was dropping dramatically. “Between 2006 and 2012, we went from being 5th in the nation for gender parity to being 32nd,” she says, noting that women comprised only 21 percent of both houses. So Hughes, who also founded the 2012 Project at Rutger’s Center for American Women in Politics in 2011, started a new project to reverse this trend: Close the Gap CA. The campaign recruits progressive women for the California legislature. “We have term limits in California, so you’re always losing women,” says Hughes. “So to gain any ground you have to replace and add them.” Nonetheless, Hughes thinks that by 2028, Close the Gap CA can help achieve gender parity in the California legislature.

A graduate of the Leadership Institute for Political and Public Impact (sponsored by the Women’s Fund of Western Massachusetts), Elechko has worked on many national and local campaigns, including Elizabeth Warren’s 2012 run for U.S. Senate. Under the aegis of her new company, Cascade Consulting, she hopes to offer a different model of political consulting that focuses on women and people of color. “Women need a different type of advising and strategic view,” says Elechko. “My firm is holistic: everything from the nuts and bolts of campaigning to advising working moms who wants to run for office.” Right now, she’s managing three Massachusetts Representative campaigns: Aaron Vega’s campaign in the 5th Hampden district (Holyoke); Marie McCourt’s (2nd Hampshire District, where Mount Holyoke is located); and Natalie Blais’s (1st Franklin District). 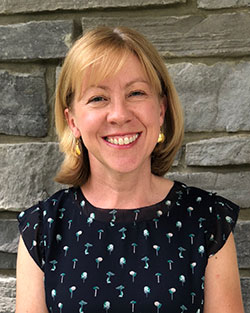 Barbour is on the board of Trailblazers PAC, a nonpartisan New York state-based political action committee that invests in local candidates who commit to clean government. “We recruit, train and endorse candidates who run for county level office or below who will run on transparency and clean government and who will meet our strict financial disclosure rules,” says Barbour. “The reality is that people aren’t aware who their local politicians are. And what they do can have more impact on your day-to-day lives.” Trailblazers PAC endorses both men and women, but 63 percent of their endorsed candidates in 2017 were women. Currently, the PAC works only in New York and Pennsylvania, but founder and president Leslie Danks Burke’s vision is to expand to all 50 states.

Smith has been politically active most of her life. A politics major at MHC, she spent part of her junior year interning for Congresswoman Patricia Schroeder (D-CO). Today, though she works full time at the Dana Farber Cancer Institute, she spends her evenings — and any other free time she can muster — working to elect progressive political candidates, many of them women. She’s worked on campaigns for City Councilwoman Debbie DeMaria (Malden, Massachusetts) and Congresswoman Katherine Clark (D-MA) and was a volunteer coordinator for Hillary Clinton’s presidential campaign. Smith, who is also chair of the Malden Democratic City Committee, says women have long made up the majority of political volunteers, but she’s never seen anything like this. “That trend has been put on steroids under Trump,” says Smith. “There are a lot of women who weren’t engaged prior, and now they’re like, ‘I’m going to start an Indivisible chapter!’ They are literally hurling themselves into organizing.” Smith and her colleagues just formed a political consulting group called the Campaign Institute.

Read about the Mount Holyoke alumnae running for office.