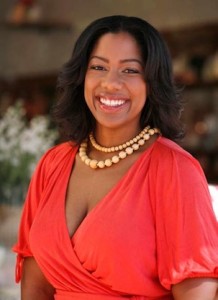 Dare to Be an Entrepreneur. A Life of Service. Changing Paths, Persistent Dreams. Sound like brochures for Harvard’s MBA program or maybe the US foreign service? Actually, these are a few of the features in a recent issue of Lip Gloss Teen Magazine, a lifestyle and fashion magazine focused on delivering positive messages to minority girls.

Oh, great, you’re saying. Another teen magazine. Yes, but this one is different. This one recognizes that girls come in all shapes, colors, and abilities. Plenty of magazines cater to teens, but the problem, says Lip Gloss founder Dolores Brown ’00, is that most of the models are white. Those who aren’t are tucked in urban publications between degrading images or adult themes.

“There is nothing like Teen Vogue or Seventeen that have positive messages with a focus on ethnic girls,” says Brown, who has worked as a plus-size model and photographer and wardrobe stylist. “Those that cater to minority girls are [filled] with misogynistic stuff.”

Brown came up with the idea for Lip Gloss when she worked at an after-school program in a tough neighborhood in Queens, New York. She was frustrated with the low expectations both those kids and their parents had for themselves and thought to herself, “I can talk to these girls, and put out more positive messages.”

She hooked into her wide circle of friends who are artists, writers, and designers, and about a year of planning later, they launched the first issue of Lip Gloss online. Profiles of outstanding “regular” and celebrity teens; tips on bargain shopping; full-color fashion features, and makeup reviews are featured regularly. Brown is insistent that her readers “see something they can connect to” and understand that they are equipped to be just as strong and positive in their choices as the featured teens.”

The language in the magazine drips slang and abbreviations popular with teens whose favorite noun is text message. “I don’t want it to feel like a magazine that a bunch of old people are doing,” says Brown. A teen advisory board lets her know if a story is too long or needs more photos—or emoticons. A popular soundtrack accompanies the text.

There are three taboos in Lip Gloss: nothing too sexy, nothing and no one that degrades or disrespects women, and no swear words. Will kids really read something this virtuous? Looks like it. About to publish its fourth issue online, Lip Gloss has jumped to 15,000 readers in nine months simply by word of mouth and the social network sites. Here’s one review: “It’s really cool,” says enthusiastic reader Amanda Rose Blackwell, age thirteen. “It’s got fun stuff about style that girls like, but serious stuff, too, like things about self-esteem and feeling good about yourself. I also like it because I’m mixed-race, and I like to see girls who look like me. I like the name of it, too.”

Brown plans to launch a paper version of Lip Gloss sometime this year. She also intends to go to graduate school in media studies, eventually. But for right now, Lip Gloss takes up all her time. “I have found my passion,” she says. So have we. We’re busy reading Lip Gloss.

Find your favorite shade of lip gloss at www.lipglossmagazine.com.