Then and Now: Outing Club Cabin 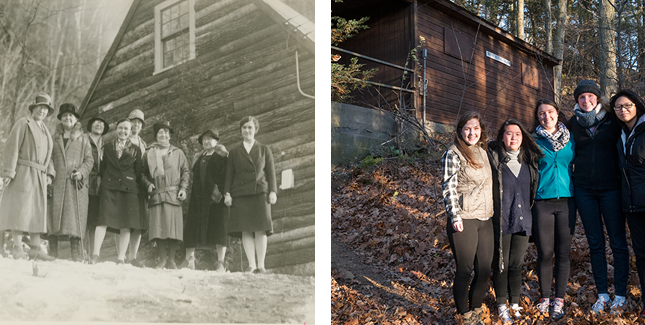 In 1928 student members of the Mount Holyoke Outing Club (MHOC) embarked on an effort to raise money for construction of a new cabin on Skinner Mountain. Led by senior Marion Emerson Dekkers ’29, the campaign was quickly successful, and on January 19, 1929, the club invited the MHC community to a housewarming party to inaugurate their newly finished cabin.

According to records in the College’s archives, members of the Outing Club encouraged all those wishing to use the cabin to bring furnishings and amenities such as chairs and pillows as well as books, cards, and food in order to “produce a true cabin atmosphere.” Doughnuts and coffee were served as guests roamed throughout the cabin with occasional “exclamations of delight . . . as people kept finding more things that add to the cabin,” according to a newspaper clipping about
the event.

The cabin held a maximum of twelve people, but because the club encouraged visitors to get to know each other, they permitted only three people per group and on most weekends arranged for four separate groups to stay at the cabin together. Spending a weekend from Saturday morning to Sunday afternoon cost $1.35 per person.

History Professor Nellie Neilson founded the Outing Club in 1921 in order to “promote student involvement in outdoor sports.” Until 1934, the club was a part of the athletic department, and so students went on the trips as part of their physical education requirements. Activities ranged from horseback riding, skiing, tobogganing, skating, snowshoeing, hiking, and canoeing.

In 1958 a fire destroyed the MHOC cabin exactly “29 years minus a day after the dedication,” according to a letter to alumnae written by Sharon Fairley Francis ’59. With the help of alumnae the Outing Club raised an estimated $15,000 to rebuild the cabin. By December 1960 the cabin was completed and once again open to the public.

Today the Outing Club is still a student-run group and still rents out the fifty-five-year-old cabin. There are bunks for six people, though additional guests may sleep on the floor. The cabin is available for rental by Mount Holyoke students and staff for twenty-five dollars per night. Those not affiliated with the College may also rent the cabin for a fee of thirty-five dollars.

There are two chair positions on the MHOC board whose sole responsibility is to schedule and manage cabin rentals and repairs. The cabin is available on most weekends, and reservations are taken up to a week before.

In addition to overseeing the cabin, the club rents sleeping bags, tents, snowshoes, and sleds, among other equipment. Of course, one of the club’s most popular and accessible events is its yearly Mountain Day hike—a six-mile round trip from the base of Mt. Holyoke to its peak and back again. 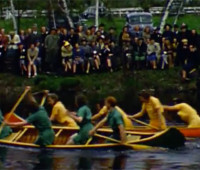 2 responses to “Then and Now: Outing Club Cabin”