“Scarf Ceremony” Turns a Skeptic into a Cheerleader 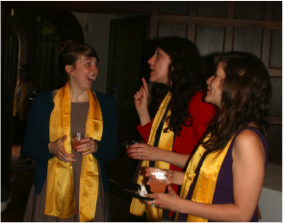 Seniors with scarves at the 2011 ceremony. Photo by Sue Carr

“What’s this welcome ceremony for new alumnae?” you may ask. It’s a new tradition, established in 2011 with the class of 1961, designed to welcome new graduates immediately into the worldwide community of MHC alumnae.

Historically skeptical of “new traditions,” 1961ers tended to resist the label of “grandmother” but classmates who had arrived by Thursday afternoon dutifully went to Chapin to participate, and were overwhelmed by the event. Class President Bobbi Childs Sampson, in a short elegant talk, welcomed the seniors to “that half century journey that we, the class of 1961, have just traveled,” and recalled our own graduation day seeing the alumnae of the class of 1911, who had graduated into a world in which they could not yet vote! “Truly a different world.”

“I was immediately impressed with the huge number of seniors who were in Chapin for the ‘scarfing,’” recalls Sherry Welles Urner, who is now 1961’s class president. “With each successive wave of seniors, the intimacy seemed to build. Congratulations and questions about future plans seemed to end with hugs and best wishes and genuine emotion, even tears. It was an awesome experience. I was so impressed with the diversity of the graduates, their respect for us, their accomplishments and aspirations. For the rest of the weekend, I noticed yellow scarves as part of graduates’ attire—and if I said, ‘Your scarf is lovely,’ the student would invariably say ‘I love it—and thank you.’ I came to the ceremony as a skeptic, but now I think the scarves were a beautiful bridge to full maturity and alumnae status.”